Dispatch from AWP 2011: An Intern-Eye View

The following post was written by Josie Keenan, Emily VanDusen, and Drake Misek, all interns at Fiction Writers Review through the Undergraduate Research Opportunity Program (UROP) at the University of Michigan.

Josie, on the keynote speech: 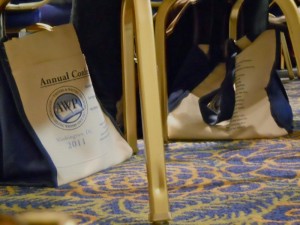 After arriving in DC Thursday evening for the 2011 AWP Conference and adjusting to the big-city lights, we three interns trekked over to attend the conference’s keynote address by Pulitzer prize–winning author Jhumpa Lahiri. Lahiri delivered her first-ever keynote with all the quiet confidence and deep thoughtfulness that emanates from her stories. In it, she explored the question: Did she always want to be a writer? Long story short: No. Or at least, not with absolute certainty. Lahiri discussed her struggles with finding her voice, finding a place to call home, and finding the right to say anything at all. The ideas she addressed, including what good writing is and who writers are, are themes that permeate the conference and can be felt in every meeting room. 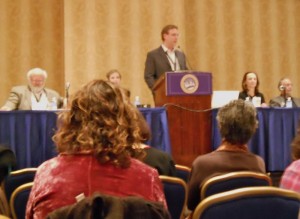 Our own Fiction Writers Review panel addressed similar issues in “The Good Review: Criticism in the Age of Book Blogs and Amazon.com.” The panel, consisting of Charles Baxter, Stacey D’Erasmo, Gemma Sieff, and Keith Taylor, and moderated by Jeremiah Chamberlin, discussed what made a good review and who could write a good review. Collectively, the panelists stressed the importance of not merely giving a letter grade or thumbs-up/thumbs-down but instead providing a thoughtful, considered, and supported opinion on a text. Rather than making value judgments (“Buy the book! Don’t buy the book”), a good review should analyze the quality of the work itself. Baxter described a good review as one that treats the text in front of you as an object that must be analyzed and described as such. The panel argued that literary criticism in itself should display good writing: good criticism, too, is art. And, as art, it is open to anyone willing to give it thoughtful consideration. The conversation, interspersed with humorous anecdotes from Amazon.com reviewers, ended with one audience member giving it a big thumbs-up.

Emily, on the bookfair: 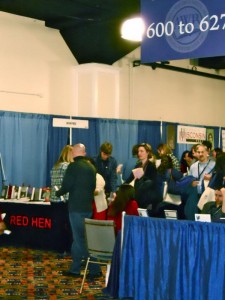 The first striking aspect of the AWP Bookfair, at least in terms of aesthetics, was the blue. Everywhere: blue. Booths and tables alike were awash in blue fabric, each with a simple white sign proclaiming the name of the organization in basic black font. Perhaps the color scheme was an effort to find some peace and tranquility in an otherwise delightfully chaotic atmosphere. But no matter the intent, the unified color palette reflected the similarly unified dynamic in the bookfair. The seemingly never-ending rooms were filled with friendly chatter between literary magazines, websites, journals, independent publishers, and other literary organizations. Featured books by established and emerging authors were prominently displayed, while representatives of each organization engaged with conference-goers in a tizzy of business-card exchanges and handshakes. 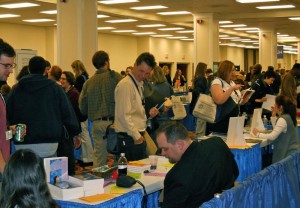 We at Fiction Writers Review brought our promotional materials to publishers, hoping to make connections and find new material to review and feature. At every table, we were met with enthusiastic response, even receiving a couple of books on the spot to bring back to the editors for possible review—including one, Downriver, written by Jeanne Leiby, editor of The Southern Review. After such a fast-paced environment of networking, the hustle and bustle of the lobby above seemed tame in comparison, providing some mental rejuvenation for the panel discussions still to come.

Drake, on the afternoon panel session: 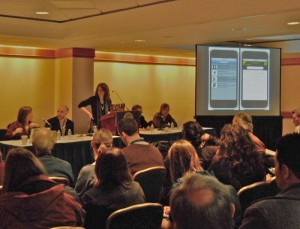 After a quick sandwich lunch, we hurried to the panel “Thinking Beyond the Book: The Future of Authorship and Publishing in a Transmedia World.” The chairs were mostly filled by the time we arrived—a crowd of a couple hundred filled the room—so we (among others) sat to the side, on the carpet. Jane Friedman hosted the panel, which included Christina Katz, “the Writer Mama,” who offers online classes to empower writers; Al Katkowsky, whose Question of the Day journeyed from an initial publication by Urban Outfitters to being re-launched as an app to a recent full publication in book form; Kevin Smokler, cofounder of BookTour.com; and Andy Hunter, editor-in-chief of Electric Literature. 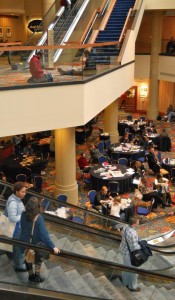 The conclusion of the panel was that writers need to find ways to engage with their communities, and that the world of trans- and new media makes this much more accessible and affordable—mostly. Hunter argued that writers should do two things: make their literature enjoyable to read, and be easy to access. Smokler agreed that writers should make an effort to engage with their audience and find ways to thank them. He and the rest of the panel approve of publishers allowing a free preview of a text, so that readers can determine if they’d really like to buy it—à la the cubes of cheese in supermarkets. Katkowsky, whose literary app stayed near the top of the charts even as the lit app field grew from three thousand to thirty thousand, proved that the possible routes to publishing a book have still not all been charted. Apps, Kindle, PDFs, podcasts, and all the other new digital ways of getting one’s literature out there have created a gigantic wilderness of such routes, one that we are trailblazing together.

Tomorrow, we’ll be attending at least two more panels, and we hope to visit the rest of the tables and booths at the bookfair. It feels like we’ve been here for much longer than one and a half days, but we’re only halfway through our trip. Stay tuned…

All photos by Josie Keenan.