(Even) more on book trailers… 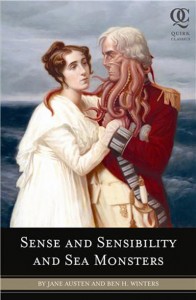 We’ve talked about book trailers on FWR before (see below)–and it seems they’re gaining an even larger (and more interesting) presence…one aspiring to an adaptation genre of its own.

GalleyCat reports that the trailer for Sense and Sensibility and Sea Monsters will be shown in movie theatres around the country. That’s the book trailer, people. On the big screen.

Meanwhile, the 1993 novel Going West by Maurice Gee inspired the New Zealand Book Council to create this absolutely jaw-dropping short film. Part book trailer, part adaptation, it’s a bona fide work of art in its own right. The council’s website has more on Gee and more on the making of the film.

“The idea that lies at the centre of this project is that reading is an activity that surprises, delights, challenges and ignites the imagination,” [Book Council chief executive Noel Murphy] says.

“We wanted to grab people’s attention for just one moment in the hurly burly world of modern media and direct them to the adventure that can be had in one’s own head at the flick of a page. Colenso and the Andersen M Studios created something that achieved that and more by literally bringing the book itself to life.”

And of course, the more traditional adaptations are still alive and well. Witness The Road, based on Cormac McCarthy’s novel of the same name; Precious, an adaptation of Sapphire’s Push; and Wes Anderson’s animated version of Roald Dahl’s Fantastic Mr. Fox, just to limit ourselves to movies now playing. Short stories are getting their film time too: earlier this month, the David Lynch Foundation adapted Tom Drury’s story “Path Lights,” originally published in the New Yorker, into a short film.

Posts on Book Trailers Past: