Free Books for A Small Price: The Future of E-Reading? 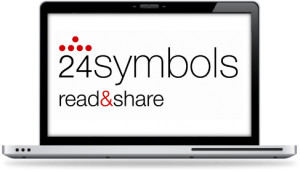 While Apple and Amazon wage price wars over hardware and e-books, the new Spanish-based firm 24Symbols aims to use their gadgets’ own Wi-Fi connections against them.

Using the Kindle and iPad’s internet browsers, 24Symbols promises totally free e-books. Readers will be served advertisements in return for free access to a wide-ranging catalogue, from comic books to novels. Springwise.com recently highlighted the new firm by linking it to popular free ad-based serving platforms in the music world:

Just as ad-supported sites like Pandora and Spotify let music lovers listen to and share their favourite music for free, so Spanish 24symbols is gearing up to do something similar for electronic books.

With the Wall Street Journal already reporting that Amazon is patenting its own ad-serving technology, 24Symbols isn’t jumping the gun so much as firing a more potent bullet: their free ad-based e-books should be more attractive to consumers than Amazon’s for-pay ad-based e-books. And with 24Symbols users able to buy print and electronic versions from within its operating system, the new firm might do more than pick away at Kindle’s e-marketshare.

Of course, selection will reign supreme, and the Big Five will need to like what they see from a revenue-sharing perspective before they open the content vault. In the end, though, “free” can never be ignored, and this could spell good things for recession-hit readers.