Get Writing: Be Authentic Write What You Know. I’ve never felt wholly comfortable with this phrase. I tell my students to abandon the literal idea of it on the first day of class. How bored and boring we’d all be if that were all any of us ever wrote. There needs to be an imbalance—more fiction than fact.

Be Authentic. I ask my students to be authentic on the page instead, to create relatable characters navigating real stories. Our goal as storytellers is to engage our readers and spark a reaction in them through a relatable and believable world. We succeed in our stories by executing a sustained level of authenticity.

My Own Medicine. For years I struggled to write a story about an artist who receives a bad review and shotguns the critic’s apartment, seeking an apology. I knew nothing about art, shotguns, or art criticism and while the story made sense, it wasn’t grounded in any relatable reality. Eventually, I introduced a new character, an old woman suffering from Alzheimer’s Disease, who teaches the critic to make marinara sauce. I used my knowledge of making sauce as the new beginning of the story, which better grounded the characters, making them more accessible and real. This new character inspired every other character to change and the story became wholly different for it.

Give It a Go. Dust off an unfinished or incomplete short story that has caused you dire frustration. Do not re-read it. (If you do, I promise you’ll get stuck again.) Create a new character, one that does not currently exist, one that is completely different from than what currently exists in the story. Next is the writing what you know part—give this new character the specific knowledge or expertise of something that you yourself possess. Place the new character into an action related to that knowledge. This is the new beginning to your story. Introduce the old characters to the new one and begin the heavy lifting of weaving the new section into the old. Be patient, but persistent. Your new material will inflict change upon the old and an entirely new story will be born. 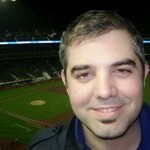 J.R. Angelella lives in New York, where he writes and teaches fiction. His debut novel, Zombie, about a boy who filters his messed-up world through an encyclopedic knowledge of classic zombie films, will be published by Soho Press next month. Pre-order it on Amazon.