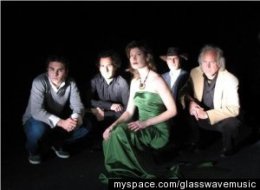 Inside Higher Ed
profiles the band and the album:

The 11-track album adapts themes and narratives from Homer, Ovid, Shakespeare, Herman Melville, Mary Shelley, Edgar Allan Poe, and Vladimir Nabokov, and sets them to musical compositions, generally in the vein of 1960s and ’70s progressive rock typified by groups such as Pink Floyd, The Soft Machine, and Supertramp.

I particularly liked the band’s thoughts on reinterpreting literature via music:

Merely superimposing Poe or Shakespeare on to a piece of music, he says, would not do; their lines are too dense. Recasting a poem or essay as a song, Harrison says, requires the translator to keep a minimum of words and fill out the rest with instrumental language — the chord sequences, phrasing, and instrumentation, which can do as much to establish a tone or reinforce a theme as pages of literary exposition. […]

Glass Wave takes a different tack. Instead of synopsizing plots, the songs attempt to “open up new narrative possibilities,” says Wampole. “They try to retell unheard perspectives of certain characters from the books.” In other words: Less Laurence Olivier’s Hamlet more Tom Stoppard’s Rosencrantz and Guildenstern Are Dead. “I grab you by your neck to stay / you splash and fall and swim away,” says Echo to an incorrigible Narcissus. “Give me a friend to ride the waves / A companion to the grave / to the grave, my grave,” pines Frankenstein’s lonely monster to its creator.

You can sample individual tracks on the band’s website and buy the whole album from iTunes or CDBaby. Next up: battle of the bands with the Rock Bottom Remainders? We can only hope.