Journal of the Week: Ploughshares 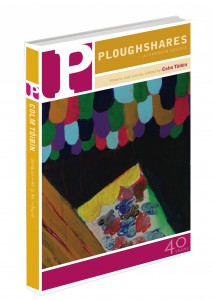 Rebecca Makkai’s Professor Alex Moore is one of the most memorable characters in 2010’s Best American Short Stories. Not just because she accidentally kills an albatross while hunting ducks in Australia, or because as a teacher of “Rime of the Ancient Mariner” she becomes a minor celebrity on campus due to the ironic crime, but because that one pull of the trigger sets forth a steady unraveling of her personal and professional lives—so thorough a deconstruction that the reader soon joins Moore in doubting its authenticity. The conclusion to Makkai’s “Painted Ocean, Painted Ship” does what you would expect a story in Best American to do—it not only connects a mistaken albatross to mistakes on the job and mistakes in a relationship, it frightens you with how such an honest error can lead to lessons much more frighteningly honest: “And she thought, if he was dumb enough to take her back, she might be smart enough to marry him.”

It was this precise line that bonded me with Ploughshares. For if I had been dumb enough not to follow the trends coming out of Emerson College before, at least I would be smart enough to follow them now.

For over forty years, Ploughshares has represented different aesthetics of contemporary literature, exposing its readership to work from established authors as well as emerging writers—to say nothing for transforming the latter into the former. Writers whose first or early works have appeared in Ploughshares include John Irving, Tim O’Brien, Thomas Lux… and the list goes on. So it’s fair to say you probably know Ploughshares. The name. The pedigree. Yet you might be surprised just how deeply one informs the other.

Founded in 1971, Ploughshares got its name from an Irish pub, the Plough and Stars, named after the Sean O’Casey play. The journal’s founders, DeWitt Henry and Peter O’Malley, frequented the Cambridge, MA, watering hole and adopted a version of its name for their new journal. It would be six years until Ploughshares opened its first office and another eighteen before it found a home at Emerson College. But even in 1971, the Plough and Stars provided the journal with seedlings of purpose. Explains the introductory post for the new and improved Ploughshares blog:

The pub was relatively new in 1971 when a group of regulars met there: Irish expatriates, Harvard graduate students, Iowa Workshop refugees, New York School and Bowery veterans, and experimental Black Mountain poets. They argued passionately about the art, politics, and literature of the day. The one thing they agreed upon was how much they couldn’t agree.

And then they did a very unusual thing. They decided to start a journal together. Their concept was to create a platform where they could each share their passions with a larger audience. And what better name than Ploughshares—the sharp edge of the plough. The connotations of the word “ploughshares” embodied—then and now—everything the founders hoped for the magazine: grassroots dedication, reform, idealism, and collaboration.

This last concept of collaboration is no throw-in: it’s a guidepost. After all, Ploughshares, which boasts more selections in Best American than any other literary journal over the past decade, is built exclusively by guest editors. All three issues in a given year are essentially made-to-order, meaning subscribers can expect a great diversity of material appealing to a wide range of tastes. Just in the last year-plus, guest editors have included Elizabeth Strout (Spring 2010), Jim Shepard (Fall 2010), Terrance Hayes (Winter 2010-11), and, most recently, Colm Tóibín (Spring 2011).

What began as a solution for solving for a lack of “editorial consensus” has led to a revolving editorship renowned for its breadth and quality. Guiding the entire process is Ploughshares’ current editor-in-chief Ladette Randolph, who was kind enough to answer a few questions over email for our Journal of the Week interview:

What is the role of Ploughshares in today’s literary community, for both readers and writers?

Ploughshares, like all literary journals, provides writers a platform for their work, for established writers to try new material and for emerging writers to be showcased alongside established writers. We know editors, agents, reviewers, and other decision makers in publishing are reading our pages. Our contributors are regularly contacted after their work appears in our pages. As for our readers, we regularly publish issues that are fun to read. We publish writers whose work they think they know and writers they haven’t yet met. We also provide an opportunity for our readers to get to know some of our most distinguished contemporary writers in a new way when they serve as guest editors. The profiles of the guest editors, their introductions, and their tastes in selecting work all give us new insights into their art.

How do you see Ploughshares’ mission and tastes evolving in the next two years? Will the rise of digital publishing impact the composition of Ploughshares?

In some significant ways, Ploughshares’ tastes are always evolving. Each guest editor brings a distinct flavor to his or her issue. I don’t see our mission changing, though. We’re already addressing issues of new technology, making issues available now in Kindle format. We have plans underway for creating material for advance Kindle and we hope at some point to make electronic issues available directly from our website. I don’t see electronic editions changing what we do (after all, we’re primarily in the business of content discovery and development); however, the ways we connect with our readers has definitely changed as we engage through social media. I anticipate more changes in that regard, the creating of a virtual literary community. Our most loyal subscribers can now, if they wish, connect with one another more easily.

If you could put three items in a time capsule (or USB drive) to be opened in 1,000 years, that would provide a snapshot of Ploughshares’ aesthetic today, what would they be?

What an interesting question. I’d say off the top of my head (1) the new cover design; (2) a Plan B essay (since this is a new series and is completely left to the discretion of the staff and not a guest edited piece, and (3) a YouTube video of one of the guest editors visiting Emerson College’s campus.

What album is playing on the Ploughshares stereo these days?
Definitely our great, award-winning Emerson college radio station WERS.

Ploughshares’ upcoming Spring 2011 issue is the first in their year-long celebration of the journal’s 40th anniversary. On that note, those of you in the Boston area can stop by the newly remodeled Paramount Theatre on Thursday, April 7th, for the Ploughshares Reading Series. Featuring Colm Tóibín, guest editor of the Spring 2011 issue, the event will include a reading, signing, Q&A, and much more.

The 40th-anniversary extravaganza continues with the Fall 2011 issue, guest-edited by none other than DeWitt Henry himself. The founding editor’s issue will feature work from previous guest editors as well as their students and colleagues whom they’ve nominated. The year will conclude in Winter 2011-12 with Alice Hoffman’s guest-edited issue.

Subscription and submission information, back issues, and much more can be found at the Ploughshares website. In addition to their blog, chock-full of author interviews, check out the official Ploughshares Twitter feed and Facebook page.

As a special bonus to readers of Fiction Writers Review, we’ll be giving away three free subscriptions to Ploughshares! If you’d like to be eligible for this week’s drawing (and all future ones), please visit our Twitter page and “follow” us.