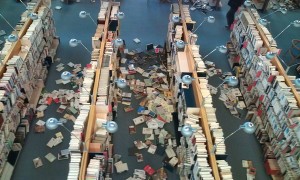 It might be made up, but fiction can still do a lot of very practical good in the world Here are three recent examples:

1. Tornado relief: In the wake of the tornadoes that devastated Alabama in April, author Shiloh Walker pledged to make a donation of $1 to United Way for every comment left on her blog post. (Via.)

2. Japan earthquake relief: In collaboration with Japanese editor Motoyuki Shibata, A Public Space has launched Monkey Business: New Voices from Japan, an annual English-language version of Shibata’s Japanese journal Monkey Business. To aid relief efforts for the recent earthquake and tsunami, 25% of all sales will go toward the Nippon Foundation/CANPAN Northeastern Japan Earthquake and Tsunami Relief Fund. Vist A Public Space‘s website to order a copy.

3. Support for homeless teens: More Than Words is a bookstore in Waltham, Massachusetts (in the metro Boston area)—but it’s much more than that. Reports the Boston Globe:

More Than Words is a bookstore filled with stories, but few may be as compelling as the stories of its employees — teenagers whose lives have been turned upside down by addiction, abuse, or neglect, who often end up in foster homes, homeless shelters, or the court system.

The same teenagers run the little Moody Street bookstore, finding stability, support and social services that help them build a resume and rebuild their lives. Hundreds have completed the program, now in its sixth year. Two years after completing the program, 80 percent of teens were involved in some combination of school, whether college courses or a certificate program, and work.

Okay, writers and publishers may not be flush with cash, but they have a history of stepping up to offer what help they can during recent disasters. And let’s not forget one of the most important things authors do to help: perhaps even more powerful than monetary aid, writers can make you understand what it’s like to be in the affected areas—and why it’s crucial to rebuild. Novelist Marie Mutsuki Mockett (whom FWR interviewed in 2010) has been drawing attention to the impact of the Sendai earthquake in the New York Times, in Glamour, and on NPR.

That’s harnessing the power of literature for good—after all, fiction makes you understand what it’s like to be someone else. As novelist Ian McEwan put it, in words that crystallize why FWR loves fiction: “Imagining what it is like to be someone other than yourself is at the core of our humanity. It is the essence of compassion, and it is the beginning of morality.”

How to Succeed In Business? Read fiction.