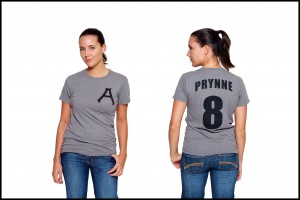 Here’s a clever gift idea for the bookishly AND sportishly inclined. Novel-T offers a complete lineup of literary T-shirts–literally. Designed to resemble baseball jerseys, each offers “an opportunity to express your support for the all-stars of literature” and bears the name of a literary figure-cum-position player.

Appropriately enough, the “expansive” poet Whitman plays center field, quick-witted Huck Finn plays shortstop, Bartleby is out in left field (where else?), and Ahab is both pitcher and–heh–captain. The front of the shirt bears an appropriate logo, from Hester Prynne’s A to Poe’s raven. Even many of the players’ numbers have been carefully chosen: Poe wears number 13, Finn is 14 (his age in The Adventures of Huckleberry Finn) and Tom Sawyer is 12 (his age in The Adventures of Tom Sawyer). Moby Dick, of course, is number 1, with Ahab perpetually right behind as number 2. A complete roster is here. (FWR readers, if you have guesses at the significance of the other numbers or positions, let us know in the comments.)

Novel-T reports that “New teams, featuring an increasing roster of domestic and foreign players, will join the Novel-T Word Series league shortly.” In an interview with Galleycat, the company’s co-creator noted:

The second team is currently being assembled–no news yet, but we see some promising players in Europe. There are plenty of 20th-Century Americans that we’d love to draft. Writers, agents, estates, or publishers who’d like to make suggestions should write me. We’re hoping to debut the next team in the spring.

Best of all, $1 of each purchase benefits 826NYC, a nonprofit “dedicated to supporting students ages 6-18 with their creative and expository writing skills, and to helping teachers inspire their students to write.”