In his acceptance speech, Haruki Murakami defends his decision to accept the Jerusalem Prize, which some Palestinian groups pressured him to refuse. 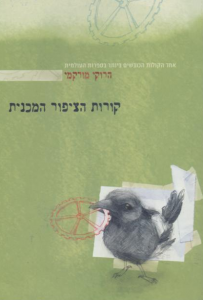 _The Wind-Up Bird Chronicle_ in Hebrew

Any number of times after receiving notice of the award, I asked myself whether traveling to Israel at a time like this and accepting a literary prize was the proper thing to do, whether this would create the impression that I supported one side in the conflict, that I endorsed the policies of a nation that chose to unleash its overwhelming military power. This is an impression, of course, that I would not wish to give. I do not approve of any war, and I do not support any nation. Neither, of course, do I wish to see my books subjected to a boycott.

Finally, however, after careful consideration, I made up my mind to come here. One reason for my decision was that all too many people advised me not to do it. Perhaps, like many other novelists, I tend to do the exact opposite of what I am told. If people are telling me – and especially if they are warning me – “don’t go there,” “don’t do that,” I tend to want to “go there” and “do that.” It’s in my nature, you might say, as a novelist. Novelists are a special breed. They cannot genuinely trust anything they have not seen with their own eyes or touched with their own hands.