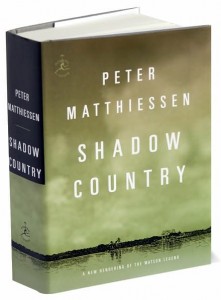 Congratulations to Peter Matthiessen, whose novel Shadow Country just captured the 2008 NBA in Fiction. In this interview (conducted after his book was named a finalist), Mattheissen describes his writing process and shares why he thinks fiction matters. Interviewer Bret Anthony Johnston asked the author what the “engine” behind his novel was:

BAJ: For some writers, the engine that powers their fiction is character. For others, it’s language. For others still, the engine might loosely be called “theme.” Do you identify with any of those? What sparked the initial idea for you?

PM: Very important as those are, the seed and engine of a novel, for me at least, is that hidden, all but inexpressible feeling […] that must be isolated and gradually brought forth during the telling.

I recently discussed that most elusive aspect of craft, theme, with my students; we read and responded to excerpts from a wonderful essay by Eileen Pollack (“How Theme Gets in a Story”), and most members of the class expressed anxiety and suspicion about writing stories that were “about” much beyond a specific situation. They’ve learned to smell falsity, overstatement, and hack symbols from a mile away…but the problem is (as Eileen’s essay notes) that this awareness also makes them afraid of any “larger” truths or connections. Of course specificity is key to good fiction, but in a vacuum, it can’t be all: instead of a work of art, it’s just something that happened to someone, and who cares? Yet it remains an unknowable mystery how we make stories matter without hitting people over the head with painfully obvious symbols or points or moralistic conclusions. Of course the best themes emerge from stories; they don’t propel them–and most of us have to write our way to meaning. But once we realize a work-in-progress’s aboutness, can we engage with it? Can we not?

I like the language Matthiessen uses to describe what makes a story matter to both reader and writer–a “hidden, all but inexpressible feeling.” He stresses that the process of getting there is anything but pre-determined, but it does involve a great deal of work and exploration:

…Eventually some kind of entity emerges , at which point I embark upon what will become the first of many drafts. I already know where I am going—not the “plot”, which is rarely important and sometimes non-existent—but in searching out the elusive feeling—the mystery or underlying truth—which impelled the writing in the first place and urgently demands creative expression.