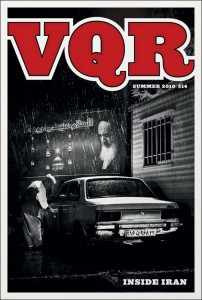 Since the death of The Virginia Quarterly Review’s Managing Editor, Kevin Morrissey, at the end of July, there has been much discussion in the literary, academic, and publishing communities about what led up to this tragedy. Some of the reporting has been sensational, some praised as investigative journalism. Frequently, both have been said of the same article. Needless to say, the dialogue at times has been vitriolic. Particularly in the sprawling comment threads that have followed so many of the essays published online in such places as The Chronicle of Higher Education and The Hook. Eventually the story grew so large that the Today Show covered it at the end of August. Their inquiry, like many others, focused in large part on the relationship between Morrissey and VQR Editor Ted Genoways, who some have accused of workplace bullying. In response to the entire incident, the University of Virginia has suspended the next issue of the journal while an investigation takes place.

Urging a different view on the situation in Let Us Now Raze Famous Men, published on The Rumpus two days ago, Steve Almond meditates “on Editors, Ambition, and Angry Dependence (in 33 loosely jointed parts).” Here, too, a large community of writers joins the conversation. Though largely observing the author’s appeal not to “pollute this comment thread with garbagio about VQR,” the discussion focuses less on the tabloid elements of the tragedy and more on the sadness of the incident, as well as the ideas that Almond raises in #31 of his post:

Our job, then, is two-fold: to focus on our own failings as writers. But also to speak more forcefully as advocates for literature. Books are a powerful antidote for loneliness, for the moral purposelessness of the leisure class. It’s our job to convince the 95 percent of people who don’t read books, who instead medicate themselves in front of screens, that literary art isn’t some esoteric tradition, but a direct path to meaning, to an understanding of the terror that lives beneath our consumptive ennui. It’s hard to make this case, though, if all we do is squabble with each other and lament our obscurity.

Whether one agrees with Almond’s treatment of the subject or not, it is good to see the spirit of community that he calls for being answered by readers. It is healthy. As one commenter noted after an exchange between Elizabeth McCracken and T.R. Hummer that concerned C. Michael Curtis, Fiction Editor of The Atlantic:

“T.R. Hummer and Elizabeth just APOLOGIZED to each other. ON THE INTERNET. Thank you, T.R. and ELizabeth. You guys are the best. You guys should get today’s Internet Award For Decency and Reasonableness.”