Philip Levine Inspires at The Great Write Off 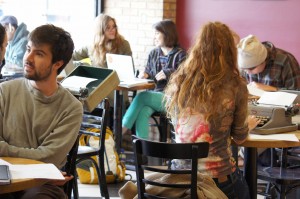 Just after noon on Friday, the typewriters in Ann Arbor’s Espresso Royale quieted. It was Day Three of The Great Write Off, but the pause had nothing to do with fatigue. Philip Levine, former Poet Laureate of the United States, had just walked in the door!

I don’t know who was smiling more as I rose from my table to greet him–him, me, or the students writing in the coffee shop. We’d been anticipating his arriving in Ann Arbor for The State of the Book the following day, but we hadn’t expected him to drop in on the write-at-thon itself. Needless to say, it was inspiring.

“This is wonderful!” he said, surveying the writers at work. We spoke a bit about The Great Write Off, and how we’d taken over the coffee shop for three days to write in solidarity as part of the write-a-thon. He told me about his own first typewriter, about the pleasures of working on the machine. Of course now I can’t remember if it was an old Smith Corona, or a Royal, or an Underwood. Maybe something else. I was too thrilled to be standing there shaking his hand to remember much of anything.

Speaking of memory, the following evening at The State of the Book, during his keynote conversation with Phil on stage in Rackham Auditorium, Charles Baxter would say, “You don’t experience happiness; you remember it.” And I think that’s right. But, boy! I sure was happy at that moment. Especially when Phil joined the students who were writing. 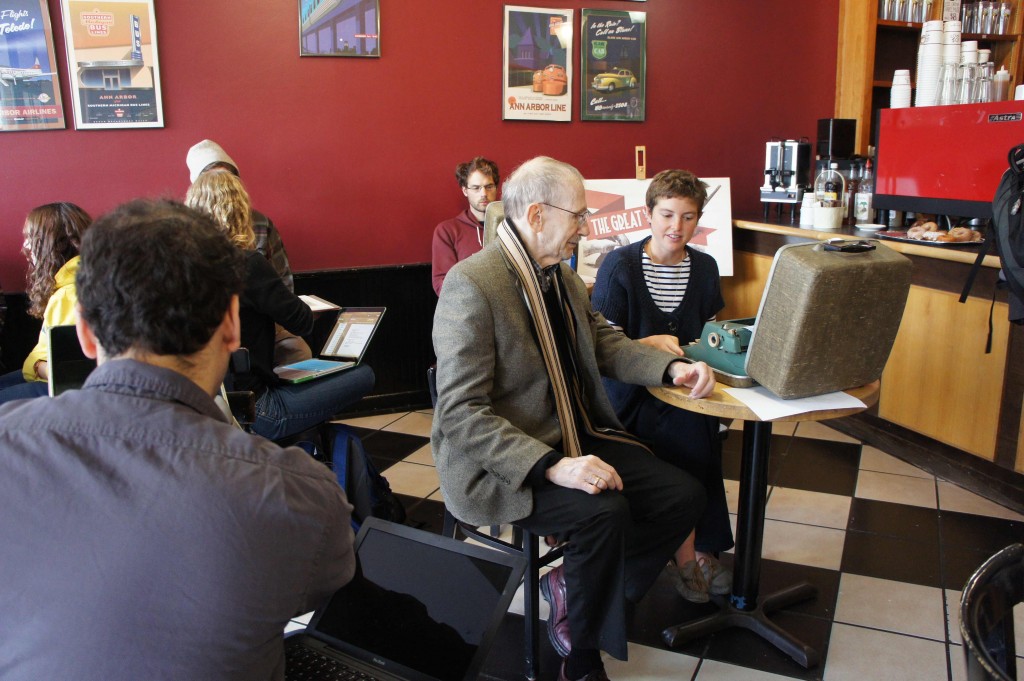 Coincidentally, he sat down next to Meghan Forbes, the Editor of Harlequin Creature, her all typewriter written journal. They were her typewriters we were working on, so it was fitting that the two would chat. I, of course, missed their conversation–I was too busy trying to take a few pictures of the historic moment. And I even managed to hold my hand still enough that a few came out in focus: 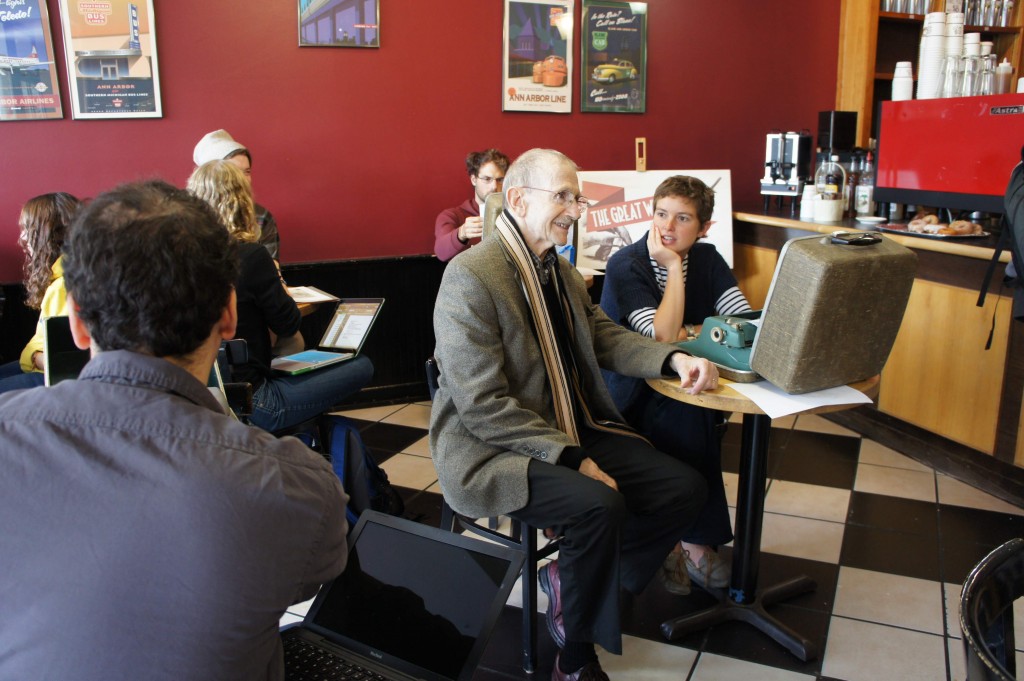 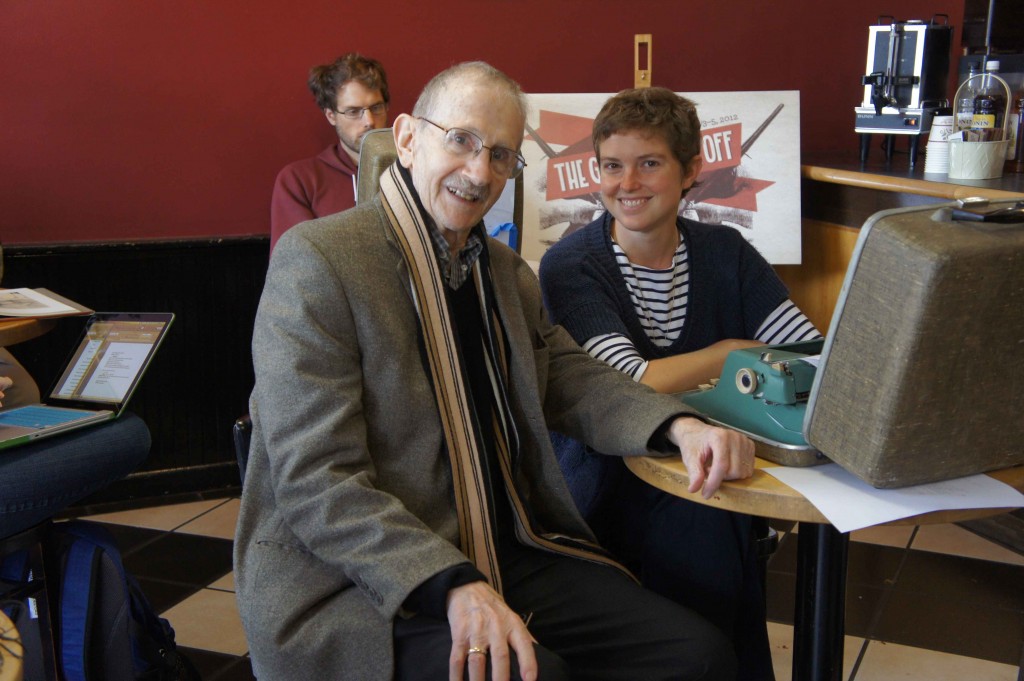 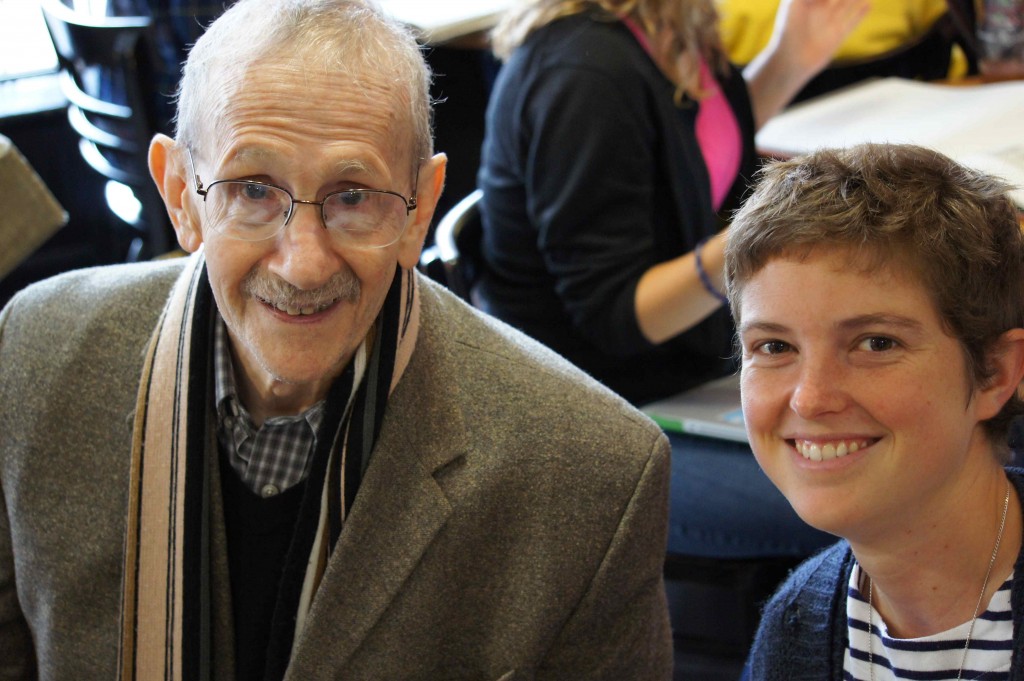 This drop-in visit by Levine was enough to make the entire Great Write Off worthwhile, if you ask me. And when he left, the coffee shop was buzzing. But even better were the reports from the writers who participated–some of them every day, some as early as 8am–about how much new work they’d produced. One former student, Trevor, reported having written 9 poems during the write-a-thon. Another, Carlina, would read a fantastic poem she’d written during the Great Write Off at a performance poetry event as part of Saturday’s State of the Book program. Yet another, Allison, would tell me, “I’ve never been this productive before.”

So I would like to declare The Great Write Off a roaring success! Not least because Fiction Writers Review–with your incredible generosity and support–raised nearly $15,000! And collectively the six non-profits participating in our write-a-thon raised an equally fantastic amount: $29,000. We can’t thank you enough for your generosity.

Tomorrow we’ll draw our Great Write Off raffle winners during the Undergraduate English Association’s post-event party and report back to you on Tuesday with the results.

Big thanks to the UEA and to the Undergraduate Research Opportunity Program (UROP) students who have done so much to make these events a success on the ground here in Ann Arbor. Your energy, spirit, and enthusiasm was crucial to the success of our programs. Thank you!

And thanks to each of the ninety-five (95!) writers who wrote on behalf of Fiction Writers Review last week, as well as to the hundreds of donors and sponsors who gave on their behalf. We are humbled and grateful. Regardless of where you joined us from as you wrote last week, we hope you had as much fun as we did. Let’s do it again next year! 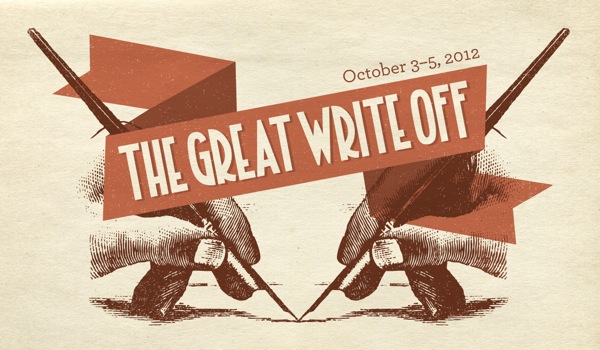 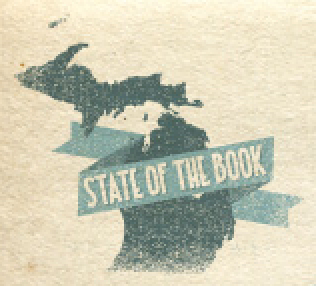 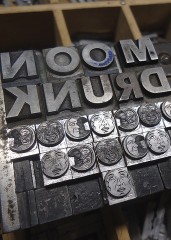