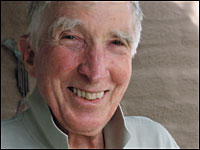 Sad news: John Updike succumbed to lung cancer today at the age of 76.

William Pritchard has drawn up a list of what he considers the author’s most important works here.

I remember hiding the Rabbit books under my bed as a teenager, loving how Updike could write even the dirtiest moments so beautifully. His prose is always alive, startlingly specific, full of those little truths we seek in literature. The first time I read “A&P,” I was 16 and bowled over by descriptions like this:

Her voice kind of startled me, the way voices do when you see the people first, coming out so flat and dumb yet kind of tony, too, the way it ticked over “pick up” and “snacks.” All of a sudden I slid right down her voice into her living room. Her father and the other men were standing around in ice-cream coats and bow ties and the women were in sandals picking up herring snacks on toothpicks off a big plate and they were all holding drinks the color of water with olives and sprigs of mint in them. When my parents have somebody over they get lemonade and if it’s a real racy affair Schlitz in tall glasses with “They’ll Do It Every Time” cartoons stencilled on.

Sure, I went through a phase in college where I was convinced he hated women, and I still don’t think anyone needs that many stories in the New Yorker. But a few years ago I returned to some of his stories and novels and was just thrilled, as if discovering them for the first time; I gave his collected Early Stories to a student I taught last semester, saying “look–in some of these stories, he was still finding his voice, but just reading Updike, any Updike, will give you a better education in developing your ear–and eye–than I ever could.”

Here is Updike himself on NPR (a few months ago), talking about The Widows of Eastwick.