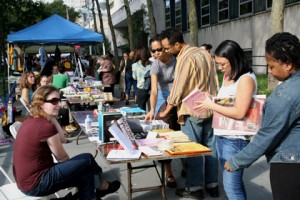 This Sunday, I’ll sadly be driving away from Brooklyn, but if you’re lucky enough to live in or near King’s County, check out this year’s Brooklyn Book Festival.

Where: Brooklyn Borough Hall and Plaza
When: Sunday, Sept. 13 from 10 AM – 6 PM
What: A book fair surrounded by a variety of wonderful events — readings, panels, interviews, tributes, literary quiz games, film screenings, a comics jam, and workshops in book-making and cartooning.

All events are free, but some require that you reserve space by picking up tickets one hour before the event at one of the info booths (on Plaza and at Montague and Clinton Streets. Limit 2 tickets per person per event.)

You can download the schedule here. The event descriptions below are just a few that made my monocle go foggy:

Editor as Author: Discipline and Freedom. A discussion on the relationship that editors play in the lives of authors in today’s publishing world and the editor’s role and sensibility vs. the authorial process. Featuring four authors who have also worked as editors: Heidi Julavits (The Uses of Enchantment), Hannah Tinti (The Good Thief), and Sarah Rainone (Love Will Tear Us Apart). Moderated by Donald Breckenridge (You are Here).