[reviewlet rewind] She Got Up Off the Couch, by Haven Kimmel 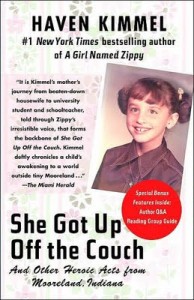 At first I was not so sure about She Got Up Off the Couch: And Other Heroic Acts from Mooreland, Indiana (Free Press, 2005), the sequel/companion to Haven Kimmel‘s A Girl Named Zippy. She Got Up seemed like outtakes from its predecessor, and the aw shucks introduction justifying a sequel worried me. (“I didn’t expect much from that little book. I was and remain surprised that some people bought and liked it.” C’mon!)

This book does take a couple chapters to get going, as if you can feel Kimmel getting back on the bike and finding the pedals. But once she does…like Faulkner returning again and again to Yoknapatawpha county, Kimmel is able to go back to the same people, the same places, even sometimes the same incidents and mine new things.

She Got Up actually surpasses the first book about Mooreland, Indiana. A Girl Named Zippy was mostly salty. Reading the stories was like eating potato chips (which, trust me, is a high compliment!) but this book is salty, sweet, and bitter: a full meal. You can see more of the poverty, more of the instability, more of the parental failures that marked Zippy’s youth, but the stories are still howlingly funny and exuberant.

Front and center this time is Delonda, Zippy’s mother (and the “she” of the title) who has a sudden burst of energy and aspiration, pulls herself out of depression and oppression, learns to drive (and procures an asthmatic disaster of a car), goes back to school, and turns out to be really really smart. But this book is not about bronzing the mother figure in a moment of American-dream accomplishment; it’s a child’s slightly baffled, slightly resentful, slightly proud rendering of that heroic act.

It’s also a portrait of Zippy’s dad, the counter-weight to each of Delonda’s efforts to rise up. You get the feeling if he had been slightly more determined in his bullying, this book could have easily been called “She Never Did Get Up off that Couch.” Zip’s dad is mean and undermining and selfish but she can’t stop loving or being drawn to him, and the heartbreaking final chapters are some of the most understated and breathtakingly non-condemnatory you will ever read about disillusionment and rejection as experienced by a kid. You find yourself wondering how you thought A Girl Named Zippy was about a happy childhood — and yet, somehow, it still was. And so is this…? I think so. I’m less sure.

Oh, Haven Kimmel — write more! (I’m kind of bereft that there’s no more Zippy to be had.) I’ll even forgive you an earnest introduction to Zippy 3 saying you are shocked, just shocked, that people liked Zippy 2. Though really — time not to be shocked.

Read an excerpt from She Got Up Off the Couch.

Growing Up Awkwardly: An Interview with B.J. Hollars