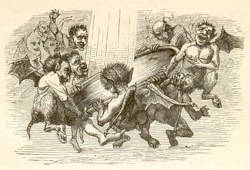 Over lunch with a friend a few weeks back, we discussed the qualities of enduring children’s literature. Almost simultaneously, we both lit upon the fairly common idea that children really, truly love to be frightened – not so different from their more mature counterparts. “Safely scared,” was how he put it, and I couldn’t agree more. December always puts me in mind of reading as a child, the early-dark nights, the cold driving us inside, reading Roald Dahl or Madeleine L’Engle or the Grimm brothers by flashlight. 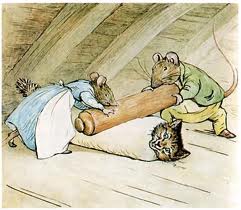 Traditional fairy tales are often far darker than our novelists dare – the troll steals the baby, the Snow Queen comes and enthralls your love, the little match girl freezes to death. Hans Christian Andersen was a master of macabre, dressed brightly for his young audience. For me, the best children’s literature stands with the best literature, period. The same things that make a novel like The Brothers Karamazov endure, make works intended for more youthful readers last: a rip-roaring good tale, an element of danger, characters that imprint on your own imagination. What books from childhood stayed with you? Do you ever revisit them? I’ve often picked up Dahl’s Danny, the Champion of the World, or Beatrix Potter’s The Roly-Poly Pudding and Two Bad Mice for a quick hit of nostalgia, and a reminder that the best stories are often incredibly simple.