"When time has to move a greater distance to get from one milestone to the next, it seems to travel faster to get there."

"Nothing 'important' comes at the reader straight in 'American Express,' and whenever I try to pinpoint what it is that makes Salter such a distinct writer, this is where I poke around for answers."

When James Salter’s first novel in thirty years was published in 2013, I was the Fiction Reviews Editor at Publishers Weekly, a position that carried with it the assumption that I’d already read all the books written by all the major authors (and most of the books written by authors nobody talks about). The day my boss handed me the galley, her eyebrows high on her forehead, my self-preservation instinct prompted me to play along—“Wow, Salter!” I wondered if the panic flushing my face was as obvious to her as it was to me. I’d never read James Salter, not a single word. I’m a total fraud, I thought, not for the first time. While I knew Salter was significant, I had no idea why. All I really knew about him was that he liked to write about sex.

That day, as I read All That Is at my desk, I realized I’d just discovered a new favorite author (and it had nothing to do with sex). So when I started assembling the reading list for a class called “The Mechanics of Tone,” Salter was the first author I thought of. Taking up his collection, Dusk (1988), I read, and immediately reread, “American Express,” a story that should be considered a classic. It begins:

It’s hard now to think of all the places and nights, Nicola’s like a railway car, deep and gleaming, the crowd at Un, Deux, Trois, Billy’s. Unknown brilliant faces jammed at the bar. The dark, dramatic eye that blazes for a moment and disappears.

In twenty pages, Salter traces the rise of two young attorneys through the ranks of New York firms in the era of Mad Men. Over the course of several years, Frank and Alan form an unbreakable bond, bed a number of women, go boldly out on their own after settling a case that nets them millions, and take a protracted holiday in Europe, where a school girl is summarily seduced and corrupted.

David Mamet once wrote that to understand drama we need look no further than the joke: Guy walks into a bar. We hear this and our imagination leaps to life. But notice how little there is. Guy. Bar. The act of entering, an opening. It’s not: “A tall, pale man wearing an oversized gray coat and a beanie pushes through the cold double doors of a downtown dive.” We are not more engaged by the possibilities of this joke now that we are burdened with details. Instead, we’re starting to lean away from the joke teller.

Writers need to leave room for the reader to do some work of their own. Without some space between the story being told and the person hearing it, there won’t be an opportunity to engage, to activate the imagination.

In “American Express,” major events do occur in the lives of these men, but Salter never lingers on them for long:

At Christmas that year Alan and his wife broke up. “You’re kidding me,” Frank said. He’d moved into a new place with thick towels and fine carpets. In the foyer was a Biedermeier desk, black, tan, and gold. Across the street was a private school.

Alan was staring out the window which was as cold as the side of a ship. “I don’t know what to do,” he said in despair. “I don’t want to get divorced. I don’t want to lose my daughter.” Her name was Camille. She was two.

Before this point in the story, which comes nearly halfway through, we didn’t know that Alan was married; we’ve spent almost a decade with him and have no idea he’s a father. Yet here he is with a little girl and a union on the rocks. Nothing “important” comes at the reader straight in “American Express,” and whenever I try to pinpoint what it is that makes Salter such a distinct writer, this is where I poke around for answers. It’s not obscurity for its own sake, it’s Salter freeing life’s events from the steady march of time. Things don’t happen, they have happened.

Everything that Salter looks away from, leaves out entirely, or approaches from the side in “American Express” makes the reader lean in that much more. We’re asked to do a lot of work in this story, to connect a large number of dots, and the engagement this invites enriches our experience. The space that Salter creates isn’t confusing or dark, it’s luminous and electric, like dusk itself, a liminal space charged with possibility.

Here are Frank and Alan missing a party:

He rapped on the door which was ajar. He was carrying his jacket, it was hot.

“All right,” he said in a loud voice, “come out with your hands over your head. Alan, cover the back.”

The party, it seemed, was over. He pushed the door open. There was one lamp on, the room was dark.

“Hey, Bren, are we too late?” he called. She appeared mysteriously in the doorway, bare legged and in heels. “We’d have come earlier but we were working. We couldn’t get out of the office. Where is everybody? Where’s all the food? Hey, Alan, we’re late. There’s no food, nothing.”

She was leaning against the doorway.

Frank had fallen onto the couch. “Bren, don’t be mad,” he said. “We were working, that’s the truth. I should have called. Can you put some music on or something? Is there anything to drink?”

“There’s about that much vodka,” she finally said.

Look at the way that Salter sets the scene, which is to say that he doesn’t really set it at all. In fact what he does could more accurately be called un-setting the scene. Or, better yet: unsettling it.

Not only does he leave ample room for the reader here (we’re not shown exactly how much vodka “that much” vodka is, for one), he engages us on another, deeper level by being slyly manipulative with time. Notice how many versions of past tense appear in that short passage. The scene primarily unfolds in past simple, but past progressive (“She was leaning”) and past perfect (“Frank had fallen”) also sneak in. Things not only happen, they also have happened and are happening. These subtle shifts force us into a constant recalibration we’re not even consciously aware of. This may not seem like much, and it wouldn’t really be much if it weren’t for the fact that Salter only moves between tenses like this in the first half of “American Express,” during those first ten pages that follow Frank and Alan for years. Their trip to Europe, also ten pages, makes up the story’s second half, but traces only weeks. And it never strays from past simple tense.

This grace is everywhere in the story when you start to look for it. Here, Salter moves from the rhetorical to the expository:

Lawyers and sons of lawyers. Days of youth. In the morning in stale darkness the subways shrieked.

“Have you noticed the new girl at the reception desk?”

“What about her?” Frank asked.

They were surrounded by noise like the launch of a rocket.

That line—“in stale darkness the subways shrieked”—isn’t just poetry; it’s a shift from “telling” into “showing,” though using these terms when discussing Salter feels almost insulting. Frank and Alan are now on their way to the office. That ear-destroying din will be familiar to anyone who’s ever swiped a Metrocard. This moment is the first shift in the story into the scene; before this point the tale has unfurled in summary, establishing in four paragraphs that Frank and Alan are in the “last rank of the armies of law,” that each was borne into it, and that they and their fathers have lived it up in a city seemingly built solely for this purpose during an era when there was really nothing much to worry about. 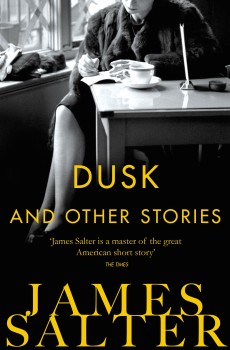 When we discussed this story in class, I went to the board to illustrate the exponential nature of time. My students laughed when I announced, pen in hand, that this was my intention. All prior attempts I’d made to illustrate the exponential nature of time had failed, I warned them, leaving friends, my wife, and other students understanding the passage of time less well than they had before I said anything. I filled the board with something like a giant EKG that moved from tremendous activity on its left side eventually giving way to a long flat line, interrupted by the odd blip or two, leading to an open grave on the right. This, I explained, was how we measure the passage of time: between milestones. It’s not how time actually moves, time moves steadily, tick-tock, tick-tock; it’s how we feel time moving. Tons of milestones happen at the beginning of life: we’re born, we cry, open our eyes, roll over, sit up, walk, run. We grow teeth, eat food, learn some language. We develop motor skills, start reading, writing, and so on. A ridiculous number of milestones happen at the beginning of a life. Many important others—like puberty, learning to drive, voting—happen in the first two decades. For most of us, our third decade on Earth brings a few other biggies: marriage, family, career. The problem is, we were trained to feel time passing as the unit of measurement between two milestones. And there’s not that much space between milestones when we’re young. Between being born and eating only seconds pass. Between crawling and walking: weeks. Between walking and talking: months. As we age the space between milestones increases exponentially. By the time we’re 30, most of the remaining milestone we’ll experience—divorce, grandkids, retirement, illness, the big sleep—will be years and then greater years apart. But our understanding of time’s passing was set early, as the space between those first milestones. When time has to move a greater distance to get from one milestone to the next, it seems to travel faster to get there. We fondly remember the endless summers of our youth and lament, now, that time flies.

My students seemed to get my explanation this time (or faked it really well), probably because the illustration was in the context of Salter’s story, and I’d started with a question: if “American Express” is so temporally lopsided, why does it feel so consistent? Pointing at my depressing EKG up on the board, one of my students said, “Because it unfolds like that.”

Salter found a formal expression in this story for his primary concern. By tracing the way we feel life passing us by in “American Express,” this story about the lasting bond between two aging attorneys becomes much more than the sum of its elegantly moving parts. It becomes a tale of time itself.