"Allegories are not meant to be imposed. Naturally, they occur in our everyday lives, through the unconscious associations we make for ourselves. "

"Told in the third-person perspective of a young boy named Joshua, 'Navigators' follows this boy and his father as they engross themselves within the world of the fictional NES (Nintendo Entertainment System) video game Legend of Silence."

Back when we sat in our high school English classes, some of our most “deeply” literary discussions on allegory happened to be the most mathematical. In our notebooks, we scribbled little algebraic equations: “Green light = Gatsby’s dreams,” “Red hat = Holden’s personality,” “Mama’s Plant = Hopes for the future,” all of which we knew would show up in the matching section of our next literature quiz.

For me, and for the unfortunate few of us who went on to study more literature and even take a few stabs at creative works ourselves, I find myself writing equations rather than characters, imposing straight-line connections rather than allowing them to shape themselves. Though I have come to reexamine previously read high school texts with a new and more understanding eye, my tendency to box entire stories into a single allegory continues to persist.

For these reasons, I have always wondered how proficient writers handle objects and “symbols,” and especially how they add textures to the one-to-one parallels I’m so used to conjuring up, both as a writer and a reader. So when I came across Mike Meginnis’ “Navigators” in The Best American Short Stories 2012 (first published in Hobart’s 12th issue), I felt I understood a little better. 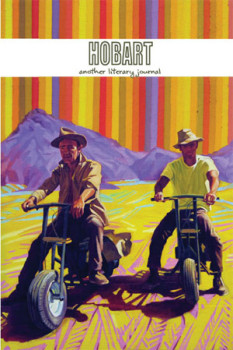 Told in the third-person perspective of a young boy named Joshua, “Navigators” follows this boy and his father as they engross themselves within the world of the fictional NES (Nintendo Entertainment System) video game Legend of Silence. The game is described thusly: “LoS was different from their other games; whereas in Metroid or Zelda the player character became more powerful as he explored, the heroine of LoS was diminished by every artifact she found.” Just as the main character in LoS goes through stages of deterioration, so too does Joshua and his father’s lifestyle, feeding on a “mostly vegetarian diet” of PB&J sandwiches and macaroni & cheese. And just as Joshua feels an attachment to Alicia, the game’s heroine, so too does he feel a longing for his absent mother who left them prior to the story’s events.

It should be easy to see how the “allegory” in question, when placed in the wrong hands, can easily simplify the complex emotions of dealing with parental absence. To handle this potential problem, Meginnis almost seems to acknowledge it, and so reveals the association between the game and the characters’ lives early on. The story narrates, “This was the logical culmination of his father’s theory of The Navigator. In games, where it was so often so easy to lose perspective, but also in life.” In short, Meginnis removes the interpretive mystery of the relationship between these two aspects of the story, as though inviting us to search deeper for its significance.

Ultimately, then, what feels satisfying and clever about these two elements can be seen in the opening line of the piece: “After they found the metal boots but before the dirt clod, Joshua’s father bought graph paper at Wal-Mart.” Meginnis introduces three objects in this line: the graph paper, the metal boots, and the dirt clod, but we discover later on that only the graph paper is “real,” while the other two objects are items within the game. Without realizing it, we are brought into the psyche of the story’s protagonists—their tendency to blur the physical world with the game’s mechanics.

We encounter similar conflations of the real and the virtual as we continue to read: “Joshua’s father pulled him onto his lap, took the controller from his hands, and finished the fight with her sword.” Here, we feel the subtle movement from a father-and-son intimacy to the action within the game. Handling the allegory is no longer a back-and-forth “one-to-one” connection imposed by the writer, but one that feels organic—a forward movement from within the characters’ own psychological associations. When he does move back and forth, the writer masterfully shows a dance, rather than jarring leaps, between these two worlds, melding them together and forcing them apart through juxtaposition and moments of interiority, so that we experience the characters’ lives as somewhere in between.

Finally, Meginnis demonstrates that he knows when not to use imagery from the “symbol,” or the video game, to evoke pathos. For the entirety of the story, Joshua has avoided the topic of his mother, using Alicia as a supplement, an object that suppresses his longing. So when the game is over, it fittingly sheds its status as a meaningful allegory, because Joshua and his father must confront their own real lives. Meginnis’ final metaphor shows Joshua reminiscing about the person he has avoided for so long. The effect feels jarring and uncomfortable, and we brace ourselves as he does, for something that we too don’t fully understand:

His father squeezed him tight. Joshua wondered what they would do now. The need he felt was like when he stepped on the sliver of glass, and his mother pulled at the skin with her tweezers, and pushed them inside, until she found the glass. It was like when she told him to get ready, to squeeze his father’s hand. Clenching his teeth, closing his eyes, waiting.

Allegories are not meant to be imposed. Naturally, they occur in our everyday lives, through the unconscious associations we make for ourselves. “Navigators” shows the real purpose behind them, working not to stand out externally, not for a reader to then point them out through a “scavenger hunt” and proudly bring to workshop or a literature class, but always to stay true to the psychological reality of the characters.