"We meet good girls and bad girls (and some still at the crossroads), as well as the women they’ll become"

Stories We Love: “The Carousel,” by Kim Henderson

"[Henderson] invites us to this place like she might a sleepover between friends, sharing the stories of adolescent wonders and tragedies the way young girls share gossip."

Though Kim Henderson’s chapbook of short fiction is only forty-two thin, soft pages, the collection’s mostly-adolescent female narrators carry the weight of the world on their shoulders. Didn’t we all at thirteen? Don’t we kick ourselves for this at thirty, when the going really gets tough? In The Kind of Girl, winner of the seventh annual Rose Metal Press Short Short Chapbook contest, Henderson transports us back to a time when identity was fleeting, when we were “thirteen and it was the summer of ugliness,” when lust felt heavier than baby fat and loneliness scarred us deeper than a pimple on picture day. She invites us to this place like she might a sleepover between friends, sharing the stories of adolescent wonders and tragedies the way young girls share gossip. 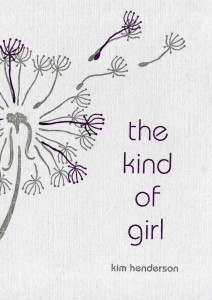 In this collection, released in August of 2013, we meet good girls and bad girls (and some still at the crossroads), as well as the women they’ll become. Henderson weaves the experiences of these girls and women together in a basket of time, growth, and forgiveness. We follow the kinds of girls who avoid “crack heads and gangsters scattered like trash” in a New Mexico city park; we visit the type of girls who drool over hunky PE teachers and notice when they come in “smelling like [their] fathers’ ratty backyard couches”; and we cringe for the brand of girl who’s “heard enough about [her] boxy torso, flat chest, shot-putter’s ass.” But perhaps most compelling is the way in which Henderson often intertwines the adult and child perspectives in a single story. So that we not only encounter the insecure girl, afraid of her intimidating father’s mood, which is forever “looming like a low ceiling.” But we also then find her in adulthood, where she realizes, “in [her] husband’s arms, [she has] never felt safe.” So despite the fact that many of these stories are fewer than 1,000 words, they often contain the darkness of much longer works. And the combination of brevity and lyricism keeps readers moving.

At the center of this collection, however—both literally and figuratively—is the haunting story “The Carousel.” Published originally by The Southeast Review, the story,written in second-person present tense, opens with these lines: “You two have sex. You feel euphoric, full, complete, all that jazz.” To fully understand the effect of this stance, a reader must know that the majority of the stories in the collection up until this point have been written in the third-person, past-tense point of view. Likewise, most of these tales have been centered on and told by girls. So through the careful placement of this tale and its juxtaposed qualities, Henderson not only achieves a sharp immediacy from this new and exciting tense, but the voice is also amplified by the narration of an adult, thereby throwing into contrast the telling of those earlier stories. And this is not just any narrator, but one who is cheeky, sensual, and outwardly cynical. About her boyfriend, she muses: “He hasn’t turned your seat heater on when he picks you up, and the rest of the week is as dull as Boring, Oregon—his dream town, you imagine.”

Henderson characterizes both the narrator and her lover through the precision of her details. For example, as the narrator rides to work with her boyfriend, a health nut, she describes “leav[ing] crumbs” of a Starbucks scone “on his meticulous leather seat” after “climbing out of his Subaru” post-lecture on “chain restaurants, preservatives and sugar.” In a little over two pages, Henderson manages to catalog an entire relationship.

Later, as the narrator runs along the Spokane River, she makes a mental list of “all the things about him [she] could live without.” She remembers, “You could have had that Hawaiian baseball player in college if you hadn’t been so scared of being with someone more interesting than you.” Readers learn so much about happiness versus complacency in “The Carousel.” When the narrator explains, “By Thursday you are grinding your teeth and he’s sweeping neurotically, jutting his Adam’s apple and carrying a continual load of misplaced laundry. You are empty. Both of you,” it feels like everything has stopped. However, after a weekend of sushi, sex, and being “presumably content,” readers learn the world’s still spinning. The lovers are still together, which makes this flash piece more about the things we think about our significant others rather than what we actually say. It makes us think not about being trapped in a miserable relationship, but instead, more reflectively, who set the trap.

The vividness of Henderson’s writing and the experiences of her protagonists separate this coming-of-age collection from its contemporaries. While I am partial to the sassy, child-like narrators that dominate The Kind of Girl, it is stories like “The Carousel”—microcosmic, visceral, full of routine and momentary passion—that remind us sometimes love’s a ride worth taking and other times it just makes us sick.