"Lipsyte is merciless with his characters."

Stories We Love: “The Climber Room,” by Sam Lipsyte

"Sam Lipsyte drops us right into a room of lack and fear occupied by Tovah Gold": Mo Daviau on Sam Lipsyte's "The Climber Room."

Society is largely cruel to older women. And it seems that the age by which women are declaring themselves “old” creeps backwards year by year. By a woman’s late thirties, she is taught to believe that should have All the Things: a husband, children, a home, a satisfying career. To come up short on two or three of these things signals that there’s something wrong with you. Maybe if you had been prettier, or done yoga, or smiled more, you wouldn’t find yourself frustrated, depressed, and fearful of acquiring cats because those stereotypes exist for a reason, right?

Or, if you’re lucky, there’s a deus ex machina: someone will come along and give you all of the things: the house, the career, the sweet, clean-smelling baby your body is screaming for. Because society has assured you, you’re no longer able to get those things on your own merits past thirty-five. 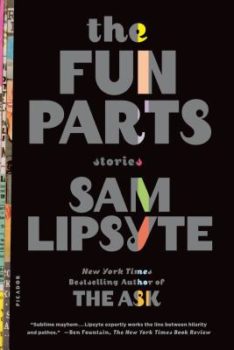 Sam Lipsyte drops us right into a room of lack and fear occupied by Tovah Gold: thirty-six, with not much to show for herself other than a string of failed dates, a part-time job at a preschool that caters to New York City’s protective, wealthy parents, and a body she keeps svelte by eating salads with no dressing. She hasn’t published a poem in ages, and she is left alone, lonely, working at a job that reminds her that her babymaking apparatus is set to expire. When one of the wealthy Sweet Apple parents, Randy Gautier, whose name Tovah mishears as “Randy Goat,” takes a shine to her, she guiltily daydreams that marrying him for his money and for his poetry journal full of “trust fund doggerel” will solve all of her problems.

Lipsyte is merciless with his characters. An accomplished author of comic fiction, it comes as no surprised that not a single one of these characters is not, for lack of a better word, sloppy. Sloppy in want and need—Dezzy, Randy’s daughter, practically smears her snotty preschool-aged nose across the page every time she appears. Randy, a fifty-something retiree who cashed in big on his tech company, is hardly the genteel, cold, or composed idea anyone might have of a tech millionaire. He is not desired or desirable—he’s rude, scruffy, the king of bad dad jokes, and described by the narrator as creepy. Even against the backdrop of New York wealth, no one in “The Climber Room” is putting on a good face. Especially not Tovah, who we see masturbating joylessly after gorging on Chinese takeout. Is her life so terrible that she needs this slovenly sugar daddy to airlift her out of downward mobility, childlessness, and the specter of irrelevance?

I was the same age as Tovah the year “The Climber Room” appeared in The New Yorker, and the first time I read it, I was drawn to it knowing that it was a story that would repulse other women of my age and station. Nuance is not Lipsyte’s strong suit, and while he is ham-fisted with his portrayal of Tovah’s particular brand of approaching–middle-age shame and fear, it was exactly this brazen, deliberately ugly rendering of unmet needs that made me feel a bit, I don’t know . . . seen? But also a little frustrated that it was a male writer who was elucidating this experience he’d never had in The New Yorker. Lipsyte wasn’t wrong, but his ability to write of bodies in states of vileness, of putting Tovah’s hope for love and security in the hands of a charmless older man, crosses wires with horror and gross-out comedy. He is skilled enough to pull it off, but I couldn’t help but think that my version of the story would have to behave more delicately than what Lipsyte is allowed to get away with.

I couldn’t help but think that my version of the story would have to behave more delicately than what Lipsyte is allowed to get away with.

The last scene of the story is troubling but has stayed with me for the past seven years. Randy Goat returns to his home after a wedding, where Tovah has been babysitting Dezzy all day. He begins touching Tovah, making it clear that he expects her to have sex with him, pointing out that neither of them are getting any younger. Tovah leaps up and delivers a speech. No new information comes out of her speech—savvy readers know all along that this is how Tovah feels about herself and Randy Goat and his money and her apparent diminishing value. While she stands by the window and tells Randy Goat all of this, he has tugged his penis out of his tuxedo pants. “He gave a shrug, and, like a loved boy, beamed. ‘It’s okay,’ he said. ‘I’m listening.’”

Gross. But also, am I stupid for thinking, for hoping, that Randy Goat really meant what he said, not just to patronize Tovah, or to get into her pants? Here lies the single, revelatory moment for me, who has lived as Tovah-in-a-different-zip-code for years now: when are you going to stop hoping for things to be different?

I asked Sam Lipsyte when he was in Portland on tour for his latest novel, Hark, if he thought Tovah really did marry Randy Goat. He smiled and thought about it and told me no, she didn’t. So at least there’s that. In spite of the fact that I love “The Climber Room,” I was relieved when Lipsyte told me she’d found better things.