"Happiness, it turns out, is not without its own kind of incredible narrative tension, a tension we are not released from until we reach the last sentence."

Stories We Love: “When in the Dordogne,” by Lily King

"This is the last gift of King’s story—her decision to allow happiness to have the last word, to make the ephemeral feeling permanent, if only in fiction": Lillian Li on Lily King's One Story story.

A student once asked me, “Are all short stories supposed to be sad?”

I remember being astonished. We were halfway through the semester, and for the most part, I would not have described any of the stories we’d read as sad. They had sad things happen in them—relationships ended, people died, parents hurt their children, children disappointed their parents—but that’s just life, isn’t it? A life without dark moments, sadness, and pain is not a life I can imagine.

At the same time, a life without levity, humor, and happiness is equally unfathomable. I had to admit that the short stories I assign, read, and even write tend to skew toward the dark nights of the soul, or at least the dusky evenings. Even the stories that incorporate levity and humor are still more unsettling than comforting. There’s a reason why author Hortense Calisher called the short story “an apocalypse in a teacup.” If you want short-form happiness, try a Hallmark card. 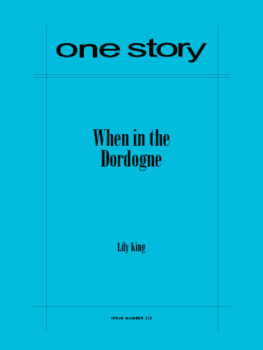 Like a Hallmark card, my subscription to One Story arrived in the mail one November day in a slim, unassuming envelope, months after my student raised her question. As its title suggests, the magazine publishes just one story at a time, and that month’s was Lily King’s “When in the Dordogne.” I didn’t realize my student’s question was still in my head until, twenty-four pages later, my assumptions about short stories and happy endings had been totally shattered. Those pages left my heart not broken, but overfull. I wept—I couldn’t believe it—from happiness.

Each time I’ve read King’s story since, the radical kindness of her characters and the magical summer she captures always reduce me to a puddle, a deeply envious puddle. Through the tears, I wonder, how did she do it? How did she avoid sentimentality and cliché? How did she write about happiness, and not only get away with it, but get it right?

The answer: by catching everyone off guard, from the reader to the characters themselves. Eileen Pollack talks about something similar in her craft essay “What We Talk About When We Talk About Theme,” when she writes, “You mustn’t be caught trying too hard to get anything you really want—love, a laugh, or understanding.”

King’s use of misdirection is apparent even in the plot summary. In her story, our fourteen-year-old narrator is left in the care of two college boys while his upper-crust parents go to France for eight weeks in order for the father to recover after a suicide attempt. The college boys are hired not, in fact, to watch the boy, but rather to take care of the house. Not a particularly cheery set up. And when we first meet the college boys, Ed and Grant, they make a similarly unsettling impression. As soon as the parents leave the three of them alone, the pair tear through the stately house like wild dogs, leaving the poor narrator helpless in their wake. Yet comingled with the younger boy’s paralysis is something unexpected, especially to him:

I stood there frozen in the downstairs hallway, not with fear but with amazement, with revelation. I had only seen people behave one way in this house, prudently, laconically, in codes I could not understand but had learned to imitate. And now here was another way.

But before we get too flabby with feeling, we’re whisked away into backstory, and a semi-tragic one at that. The narrator reveals he was “a martini baby,” a late-in-life accident. An inconvenience to his parents, he has grown up not only lonely, but also with “a sense that [he] had been terribly, terribly bad.” Indeed, when the mother interviews Ed and Grant for the job, she talks only of the house—when the pool cleaner will come, where the circuit breakers are. It is in the background of this parental neglect that we get another glimpse of unexpected kindness:

It was Grant who asked about me. “Could you give us the run-down on your son?” I don’t think he knew my name yet. “When he should be in bed, what he likes to eat, where he’s allowed to go on his bike.”

Immediately, the story steps in with more misdirection. First, the mother changes the subject (“Oh, he takes care of himself quite well, really”). Next, the narrator himself dismissively reports: “They were just two boys, young men I suppose. Nothing particularly special about either of them.”

Not only is happiness deliberately hidden behind a curtain, the curtain that hides it is the narrator’s own skepticism. The first few pages are full of tension as the narrator studies the college boys, wondering if they are friends or foes. Ambivalence dots the narrative:

“Chatting wasn’t something I was used to.”

“I liked them, Ed and Grant, though I wasn’t about to say that.”

“I felt so uneasy with all this interrogation, but I liked it, too.”

This tension easily carries over into the reader, who is watching from the narrator’s shoulder. We all know what older boys are like. We all know what they can do.  And we worry on the narrator’s behalf. When we see the Ed and Grant drinking beer at the dinner table, we worry. We worry when the narrator scolds them for going into his father’s study, and worry when they stifle their laughter. Worry, when Ed makes a comment about how civilized it feels to be rich. Worry, when the older boys go skinny-dipping in the family pool. 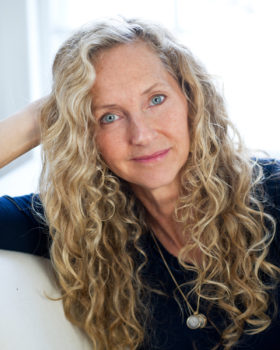 But the real reason we worry is because we also, as readers, as people, do not expect happiness in the everyday—we can barely allow ourselves to believe in the possibility of it. Life has taught us, has taught our narrator, differently. That is ultimately why misdirection works. The experience of happiness is often one of disbelief. “For me?” you wonder as your cheeks ache from smiling. “All this for me?”

“They were just two boys. Nothing particularly special about either of them.” When you reread King’s story, that earlier statement of dismissal will, in fact, turn out to be a statement of wonder. And I do recommend you reread King’s story. I certainly did. I wanted to experience the happiness she allowed to flourish in her story without the fear that shadowed my first read. Happiness, it turns out, is not without its own kind of incredible narrative tension, a tension we are not released from until we reach the last sentence. When nothing bad can happen, in other words. We are never not aware of the fragility of happiness, and there is a doubling of joy to realize that for once, against all expectations, happiness perseveres. This is the last gift of King’s story—her decision to allow happiness to have the last word, to make the ephemeral feeling permanent, if only in fiction.

I looked down the street at all the houses and driveways and everything seemed funny, or about to be funny. Even without [Ed and Grant], I still had the feeling of being with them. My heart was still singing.

As King herself writes in an interview, “Part of happiness is…getting something so meaningful from a place you least expect it.” So too, it appears, is the craft of writing happiness. Happiness in short stories, just like anger, sadness, violence, should be a surprise punch in the face, sparking tears and bewilderment. The reader, the narrator, even the writer herself should have little idea of what’s coming. It should hit us so hard we see stars.