Thoughts on the newly released design plans for renovating the historic Bryant Park branch of the New York Public library.

The historic Bryant Park branch of the New York Public Library, whose planned renovations have been the source of controversy during the past year, released information about British architect Norman Foster’s design plans today. The renovations are expected to begin next summer and cost $300 million, meanwhile consolidating costs by moving the circulating operations of the nearby Mid-Manhattan branch to the main library. 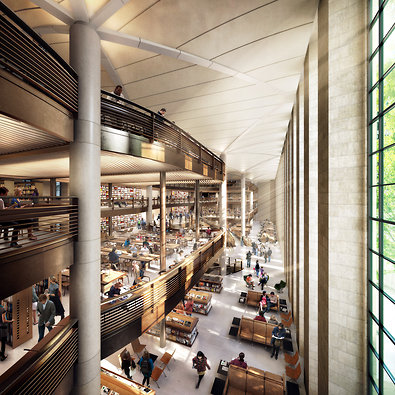 Architect's rendering of the circulating area of the renovated library.

Among the changes that have sparked controversy are the removal of 1.2 million books from the research area of the library. Salman Rushdie, Jonathan Lethem, the Paris Review‘s Lorin Stein and other writers and editors have been among the critics who want those books to stay put and the historic architecture to remain unaltered. The books aren’t going far geographically–just over the state line to Princeton–but perhaps having instant access to a trove of seldom-read codices makes even a 21st century writer feel secure.

The general tone of the renovations privileges the comings-and-goings of the public over space for housing books–another concern of critics. But writers living in cramped apartments should celebrate: what’s currently staid office space on the 2nd floor will be converted into an area that can accommodate up to 300 writers and researchers at work on projects.

As cities rethink the future of libraries, I think NYPL administrators are prescient to plan to preserve the beloved space as a meeting-place for readers and writers, part of the dwindling public sphere, even as they think ahead to the day when some of the displaced books will be too crumbly to deliver into a patron’s hands. Thoughts?

You can have a look at the description of the plans and Foster + Partners’ renderings of the new spaces.