The Dutch author Nescio wrote little, quite rarely, and under a pseudonym that means “I don’t know" - yet he's quite famous in Holland. In the first English translation of his major stories, a group of poor artists struggle to make sense of Amsterdam between the wars. The world is changing out from under them - sound familiar? 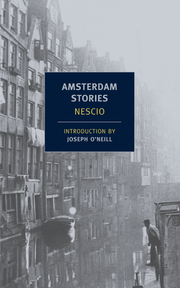 The Dutch author Nescio (real name J.H.F. Grönloh) wrote little, quite rarely, and under a pseudonym that means “I don’t know.” Since his death, his tiny body of work has become famous throughout Holland, and this April The New York Review of Books will publish the first ever translation of all his major stories, under the title of Amsterdam Stories.

The first sensation when reading the Damion Searls translation of Nescio is distance—of form, not content. Even though the stories are told with perfect simplicity and lucidity, one’s reading is troubled by a difficulty in comprehending their structure, in catching hold of some central action or event being portrayed, or who the main character might be. The first four stories in the collection describe the same group of characters, a circle of would-be bohemians, and we watch them in each story struggle for money, labour at art, suffer through penniless winters, while around them bourgeois society goes on bustling and preening, never becoming aware of this powerless rebellion in its midst.

The friends always fail. They are only (as the title of one story suggests) “Little Titans,” and they will either surrender to society or die. The narrator seems himself confused by these tales, as no solution is found, yet he knows that the experiences themselves were meaningful, even if youth did not last. The stories wail again and again against the failure of the rebellion they describe, until, in Nescio’s last story, “Isola Dei,” written during the Nazi occupation, the loss of the narrator’s youth is mirrored by the loss of the country itself, and the self he laments is only a miniature of the world that economic progress and war have destroyed.

Yet these stories are also very funny. His story “The Freeloader” describes the narrator’s memories of Japi, a vagabond and scrounger, a man who continuously attempts to avoid all effort. “I am nothing and I do nothing,” Japi explains, and he disrupts these bohemians’ lives by revealing just how much stress and responsibility they have accepted. Japi has a Whitman-esque pleasure in observing the multiplicities of the world, without Whitman’s desire to subsume these into himself. Japi simply observes, and enjoys. He knew everything along the railroad line from Middleburg to Amsterdam: every field, every ditch, every house, every road, every stand of trees, every patch of heather in Brabant, every switch in the tracks… And he’d nod and laugh whenever he saw something he knew especially well. Or else he would say, “Look, the tree is gone,” or “Hey, there are new apples on it now, I didn’t see any last time.”

Japi’s inability to understand normal people’s demands reminded me of the brightly innocent Sylvie, in Marilynne Robinson’s Housekeeping: Japi remains jovial as the people around him grow enraged. Japi explains his failure to keep an office job by saying:

I was always late, I really tried to get there on time but it never happened, it had been going on too long. And so boring. They said I did everything wrong and I’m sure they were right about that. I wanted to but I couldn’t do it, I’m not the kind of person who is cut out for work. Then they said I was distracting the others. They were probably right about that too… I could tell a good joke, and they liked that, but it wasn’t enough for them.

Japi’s radical strangeness cannot last—he becomes serious, gets real work, and his life only worsens. Yet for a while he seems outside of the weight of the world, in contrast to the story’s narrator, Koekebakker, an aspiring writer, who is constantly short of food and warmth.

All day long it had been raining hard, almost without a break. The water ran in streams down my window-pane. It felt cozy inside. I liked it. I had no stove and my summer coat was still at the pawnshop. I had never owned a winter coat. The frost was a problem: you had to stay in bed out of poverty, it was the only way to stay warm.

Koekebakker admires something in Japi, some greater resilience, just as he admires the talent of his painter friend Bavink, who is able to sell his work, to keep painting—although we eventually learn that neither man’s defence against the world holds for long. For there is a further darkness to these tales. Although the friends disdain middle-class respectability, it is not their deepest enemy. On the edges of society, they confront the inevitable passing of time, and the vast size of the universe that seems to rob any one existence of meaning. What does a moment of wonder matter when time is always rushing on, and human beings are merely blips in the vast silence of non-existence? The narrator grows more and more aware that the death of desire in one person is not simply one man or woman’s loss, but a sign and portent of the doom we all carry. We all struggle in a universe that does not recognise the validity of desire, and we do not belong here, because our desires are constantly seeking a fulfilment they can never have. What sense can we make of this universe of death?

I thought about when these two gentlemen would die, and stand naked at the Last Judgement, and be forgotten down here. And about terribly important gentlemen coming and taking their place… And how many idealistic young people down here would have written essays by then, and written little poems and painted little pictures, and gotten angry and gotten excited about things. And kissed. And then grown important too, perhaps, and been forgotten as well.

And in this sense, the stance of these “little titans” is not just against modern capitalism, but also against time. If time will grind us all to dust, one protest is to refuse to compromise on desire, to love and adore all that one can. And among those adorations, these characters’ one true beloved is nature. They trek around the Dutch countryside, letting beauty work on them, hoping to catch it unawares.

I looked out to the east along the dike, at the couple of scrawny, windswept trees at the water’s edge, at the water, and the sky turning darker. And then Hoyer, sitting across from me, said, “Look at that sky.”

To the southwest the whole sky was yellow. And I turned to sit sideways on my chair and look, and I saw that it was good, everything was good as it was and there was nothing left to conquer, and I was alive.

This passage comes from my favourite story in the collection, “Out Along the IJ,” a very short tale of a trip along a river that leads two of the friends to rent a tiny cottage there, staying until their money (and credit) runs out. They become strange holy figures to the narrator, every day painting and observing, and there is a wonderful scene where an old flame comes to visit Bavink: annoyed by his slovenly ways, she takes off her dress to wash the stack of dirty dishes, and as she scrubs the crockery clean, the village’s schoolchildren crowd at the cottage’s window to watch, pressing “their little farm noses against the window so that all you could see were little white triangles all over and they wouldn’t leave.”

The beauty of nature, and its survival in memory, along with art’s fitful attempts to preserve and communicate it, are the only tools that Nescio’s characters have to fight off the rule of death. If there are other methods, he does not know what they are, and his characters all grow old and sad. Yet his narrator clings to his memories, and in them finds more than just consolation: he finds moments of vision, where a different universe is found. In Nescio’s last story, “Isola Dei,” while cycling alone to Eindhoven, the narrator experiences the rising beauty of the natural world, and announces with total confidence,

The day has become mine once more and mine the enchanted world. The sun stands still, there will be no night.