Tim Z. Hernandez’s Breathing, In Dust rips along like one of the trains whose wheels sing Catela, Catela, Catela, Catela as they churn through the San Juaquin valley. In twenty linked, ferociously compact short stories and a lyrical prologue, Hernandez sings of Catela too, triumphantly bringing this fictional farming community to life. 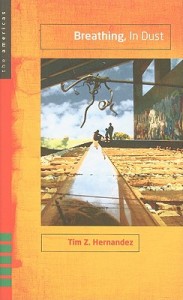 Tim Z. Hernandez’s Breathing, In Dust rips along like one of the trains whose wheels sing Catela, Catela, Catela, Catela as they churn through the San Juaquin valley. In twenty linked, ferociously compact short stories and a lyrical prologue, Hernandez sings of Catela too, triumphantly bringing this fictional farming community to life. Described as “nothing but darkened flesh and muscle and spade and oxen black as pitch, and a few seeds spilled from a rucksack brimming with disease and curse and karma long past due,” Catela also contains a rugged, funny, and frequently depraved batch of characters.

The usual suspects, pious grandmothers and savvy “campesinos,” inhabit the valley, as do more haunting figures like Norma—a young lesbian who, jilted by her lover and oppressed by the intolerance of conservative-minded Catelans, throws herself in front of a train. Breathing, In Dust focuses mostly on a young man named Tlaloc, a Chicano Stephen Daedalus (Hernandez ironically names him after the Aztec fertility god), who narrates many of the stories and binds the cast together. He and his friends, boys with similarly bizarre names like Animal, Pepsi, and Jesus—“not Heh-soos, but Geez-us”—roam the impoverished streets of Catela. They do drugs, hunt opossum and crawdads, and dare each other to lie on a thin bridge while trains barrel past, showering them with sparks. 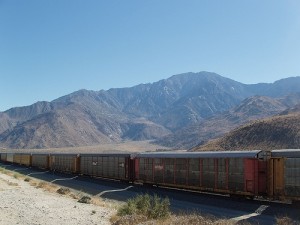 Hernandez proves expert at using elements such as symbolic names and clever plot devices to emphasize his complex critique of religion, mythology, and consumer culture. Despite their travails, the people of Catela remain devout—one woman cannot say Jesus’ name without pulling “her rosary from between her cleavage, like a bucket out of the well,” and kissing it—yet the woeful Norma’s numerous letters to God and Tlaloc’s mother’s prayers “go unanswered.” A priest even refuses to bless the ashes of Tlaloc’s grandmother because cremation violates holy law.  “It would be an abomination,” he says, so they bury the woman without ceremony in the same coffee can “she used to gather her cigarette ashes in.” Through Breathing, In Dust Hernandez delivers this brave message to a penurious, god-fearing community: The heavens (and the lottery) offer no solace—look elsewhere for redemption.

With his vivid descriptions of the physical features of his characters, Hernandez deliberately equates Catelans more to the land and animals they care for than to the gods they revere. In a graphic opening chapter, Hernandez draws clear parallels between Animal, “a disturbing lump of a man,” and the pig he bloodlets. “Between [Animal’s] shoulder blades, at the stem of his neck, was a round hump of muscle,” he writes. The reader often views these figures through the critical perspective of Tlaloc, but as the occasional narrator ages over the course of the book, he also supplies intimate and untrammeled detail of his own sexual maturation. Eventually, the young man unintentionally impregnates his girlfriend, Talina (who cleans carcasses at a butcher’s shop for “five bucks an hour”), and the two elect to visit a rundown abortion clinic, where even the glossy magazines have been pitted. These types of experiences sufficiently traumatize Tlaloc, so that by the end of the novel he realizes that if he is to escape Catela it must be through the intellectualism of art.

Tlaloc travels to Los Angeles for a poetry reading in one of the book’s final chapters, a move that parallels events in the life of Hernandez, who began his writing career as a poet (his debut collection, Skin Tax, won a 2006 American Book Award). Many of the techniques that make Hernandez’s poetry so compelling also enrich the prose of Breathing, In Dust. The language of the novel is lifted by rhythm, imagery and metaphor. Readers can see, smell and feel Catela’s “greasy streets stained with the hot juices of drooling fruit trucks and roadkill left to stew in the sun.” Hernandez’s greatest talent lies in weaving setting, theme and character together with colorful similes. A bartender has “a body like a sack of radishes” and “the clouds hang like jowls.”  He describes Animal’s fingers as “knotted like tree limbs,” and the veins that flick in his forehead “like a den of snakes.” On a more mournful note, Tlaloc’s grandfather’s cancer is “busy blooming in his crotch like an undetected root.” Through such memorable images, Hernandez delights the reader with lyrical language, while simultaneously immersing them in the migrant farming experience. 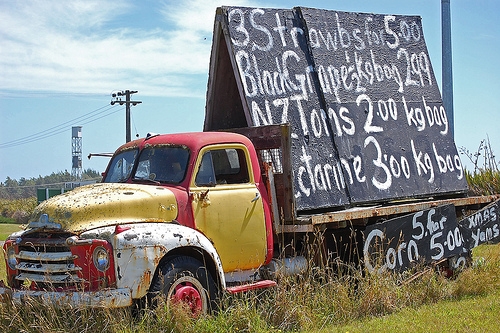 Hernandez’s depiction of this particular Chicano community proves stark, but he never loses sight of the pervasive human element. In the dump yard where Tlaloc and his parents scavenge for clothes, trinkets, books and baseball gloves, farmers burn piles of dead cows, whose guts boil and burst, “globs of shit flying in all directions.” Tlaloc’s family chews on grapefruit as they watch this grim spectacle. But the story moves from this macabre scene to a surprisingly heartfelt conclusion. 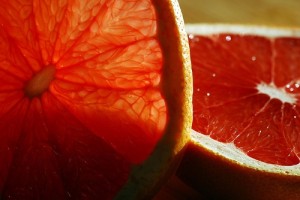 When the sugar beet season ends and Tlaloc’s family moves on, the boy ponders why they depart at night: “I don’t know. I only know that the sky was so clear…we could see every last star glittering at us from beyond.  And then, like always, we would wake up someplace else.”  Readers of Breathing, In Dust will thoroughly enjoy awakening to the artfully rendered world of the migrant farmer. 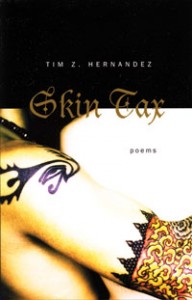