Legend of a Suicide, by David Vann

The stories in David Vann's second book, Legend of a Suicide, circle compulsively around a central fascination—a father’s suicide. Partway through "Sukkwan Island," the central novella in the collection, I decided I had to put the book down—just for a day, until I felt ready to read on. I mean this as praise. Legend of a Suicide is a very difficult book for the very best reasons: it is written with great honesty and journeys unflinchingly into darkness. It is a reckoning. 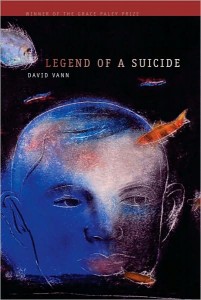 Partway through “Sukkwan Island,” the central novella in David Vann’s collection Legend of a Suicide (U of Massachusetts Press, 2008), I decided I had to put the book down—just for a day, until I felt ready to read on. I mean this as praise. Legend of a Suicide is a very difficult book for the very best reasons: it is written with great honesty and journeys unflinchingly into darkness.

This is Vann’s second book. His first, A Mile Down: The True Story of a Disastrous Career at Sea, is a nonfiction account of his misadventures at the helm of a ninety-foot sailing yacht. Vann’s father was also once an armchair sailor, and as Vann acknowledges early on in A Mile Down, “I have thought more than once that perhaps I embarked on the entire boating enterprise simply to repeat his experience so that I could know him better.” Vann’s father killed himself when his son was thirteen. His death casts a long shadow over A Mile Down.

Legend of a Suicide, though fictional, goes further. It is a reckoning.

Set largely in Vann’s native Alaska, the stories follow Roy Fenn from his birth in the opening lines of “Ichthyology” to his return, at thirty, to the town where his father took his own life years earlier in “Ketchikan.” And yet, though they share a cast of recurring characters—Roy and his father Jim, Roy’s mother and sister, his stepmother Rhoda—and though they are arranged in roughly chronological order (a short closing piece, “The Higher Blue,” gazes back retrospectively, providing a coda), these five stories and one novella are not linked in any overt sense. There is no narrative through-line to follow, no accounts given of the events that take place in the white spaces between one piece and the next; the stories occasionally tread over similar ground or provide contradictory information about characters and their histories.

Rather than a novel-in-stories, then, this is a collection-as-collage. It circles compulsively around a central fascination—a father’s suicide. Each piece represents a separate and independent attempt to shed light from a new angle.

Vann writes, for the most part, with a sturdy flatness of observation and sentiment. The physical details of his fictional world are described with a reportorial accuracy that meshes well with his habitual emotional understatement. Occasionally, though, the prose lapses into self-conscious poeticism—see, for example, the opening of “Ketchikan.” And although many of these stories prove fluent in the use of image and implication to carry the weight of meaning, at times they seem to strain for insight. “Memories are infinitely richer than their origins, I discovered,” Roy muses at one point; “to travel back can only estrange one from memory itself. And because memory is often all that a life or a self is built on, returning home can take away exactly that.” Such thematic hyper-articulation might work in a memoir, but it tends to ossify a short story.

And yet, as a reader, I find myself treating such passages with uncharacteristic charity. In general, I’m loath to draw connections between an author’s life and his art, but in this case it’s hard not to read these occasional lapses as artifacts of the struggle to turn fact into fiction. “There’s exposure in these stories,” Vann writes in his acknowledgments. “They’re fictional, but based on a lot that’s true.” In fact, Vann may encourage comparison between truth and artifice—for example, the name of the father who appears in these stories, Jim Fenn, seems intentionally similar to the name of the real-life James Vann.

In any case, our knowledge of the life that inspired this art complicates our reading experience in a meaningful way: as audience members, we are moved not only by the characters onstage, but also by our dim and perhaps half-imagined awareness of the painful contortions of the artist, high above, working the wires.

Nowhere does this dual awareness have a more powerful effect than in the harrowing novella “Sukkwan Island.” In the opening pages, Roy and his father are left alone on a remote Alaskan island, where they plan to spend a year in a rustic cabin, living off the land. For the father, the retreat is an attempt to outrun his demons. But neither he nor Roy possesses the knowledge or the skills to survive in the wilderness, and as their situation grows more desperate, Roy increasingly finds himself playing the role of bulwark between his father and whatever abyss the father has been contemplating. Throughout, Vann renders physical labor (for example, the Sisyphean effort put into digging an ultimately useless underground “cache” for winter stores) and mental anguish (Roy’s nightly battles to ignore his father’s soft, insistent sobs) in the same relentless, blow-by-blow detail. For Roy and the reader alike, the novella’s first half is an inwardly spiraling descent into physical and psychic claustrophobia. This is, in a very literal sense, a horror story.

But Vann doesn’t settle for horror alone—he chooses to narrate the second half of the novel from the father’s perspective. The result is not only a surprisingly empathetic (if still often horrifying) evocation of the fictional Jim Fenn, but also—it seems to this reader, at least—a piercing communiqué from author David Vann to his own father. It is a message of profound sympathy and sadness, anger and regret. The novella’s final lines seem, in a sense, to belong to the character Jim Fenn, his real-life counterpart James Vann, and author and son David Vann, all at once.

As a word, suicide may refer to the act itself or to the person who has committed it. The legend constructed by these five stories and one novella is of a man, Jim Fenn—who must in some ways be James Vann, and who, through a transfigurative act of authorial empathy, is also in some ways David Vann. “I’ve come to realize,” Vann wrote at the outset of A Mile Down, “that life can be a work of art, constantly melted away and reshaped.” Legend of a Suicide is the melting away of one man’s past, and the reshaping of tragedy into art. 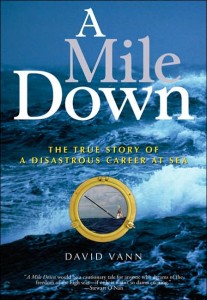 – Read an excerpt from “Exit Wounds”, a story from Legend of a Suicide.

– To preview A Mile Down, Vann’s first book, click on the cover.

– Listen to interviews with Vann on The Story and on Chicago Public Radio.