"For better or worse, as Lucy Barton also discovers, you can run from your mother, but you can’t hide."

My Name is Lucy Barton, by Elizabeth Strout

"There’s also story-telling magic at work in this incantatory book; it sparks resonant memories of stories heard and internalized: once-upon-a-time-stories, fables, fairy tales, and myths, as well as those from Shakespeare and the Bible."

“You have one story,” Lucy Barton, the first-person narrator of Elizabeth Strout’s new novel, recalls a writing instructor having taught her. If that is so, if each writer has one story to tell, to re-visit, to re-imagine, then Strout’s continuing story is of complicated but sturdy family ties, of families bound together by twisted veins, stained and sustained by blood that is thicker than water—families who love and harm each other, disappoint and come through. She has addressed that theme variously in her four prior books, each of which has featured distinctive families, for despite Tolstoy’s adage on this point, happy and unhappy families are both alike and different. Here she tells a fresh but related story of a strong but compromised family relationship, a flawed family with secrets. Each of our families, and each of Strout’s fictional families, is unique, and each unique family is also Every Family, with its own memories and regrets, skeletons and secrets—though not always secrets so dark as Lucy Barton’s.

My Name is Lucy Barton (Random House) is the narrator’s extended sickbed reverie, prompted by conversations with her mother over the course of several days. Lucy Barton, a writer, is marooned in a hospital room high above Manhattan while doctors try to diagnose her mysterious malady, her intractable fever. She’s lonely, frightened, cut loose from daily life, tethered to bed—and both surprised and reassured by her estranged mother’s unexpected visit. Her mother, summoned by Lucy’s husband, has taken the first airplane flight of her life, arriving at her daughter’s bedside like a fever dream, a severe Walker Evans Madonna from the impoverished rural life Lucy escaped years before. Lucy’s father remains behind on the farm, a malevolent off-stage presence. Lucy’s own husband rarely visits, occupied with work and their young daughters, for whom she yearns. 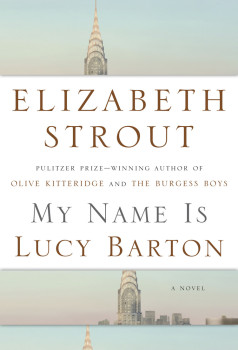 This is a deceptively simple novel with its cast of two, its spare hospital room setting, but the narrative is told in such an intimate, reflective first-person voice that I experienced the book as though I were Lucy’s hospital roommate, lying in the next bed, listening through the privacy curtain to the rise and fall of the allusive conversation between Lucy and her mother. Mother and daughter talk around rather than about the poverty and cruelty that marked Lucy’s childhood, her mother’s marriage, their family. Their silences and evasions became negative space I found myself filling with my own imaginations and projections. Here, one doesn’t miss what’s not said, but instead sees with the mind’s eye like a child lying in the dark, half-asleep, listening to a parent reading aloud: that liminal moment of crossing the border from awake to asleep, from consciousness to dreaming. And at that final threshold instant, neither the words nor the imagined pictures matter to the child, for finally, as Lucy Barton says, “It was the sound of my mother’s voice I most wanted.”

There’s also story-telling magic at work in this incantatory book; it sparks resonant memories of stories heard and internalized: once-upon-a-time-stories, fables, fairy tales, and myths, as well as those from Shakespeare and the Bible. And in many ways this is a familiar story, of a mother who, like most mothers, loves deeply but—contrary to what children and parents almost believe—has neither omniscience nor omnipotence, and who makes mistakes of omission and commission. It’s the story of a mother as Every Mother, often helpless to protect her child from the consequences of the mother’s own choices and frailties, and later still unable to protect the launched, independent adult child from the slings and arrows of life and fortune. After all, even the goddess Demeter could only rescue her abducted daughter Persephone from the underworld for half of each year, the bargain for her act of consuming those six pomegranate seeds.

But for me there was one story more than any other which Strout’s book brought to mind. When I put the book aside and turned off my bedside light, the story I fell asleep to—heard in my mind’s ear, saw with my mind’s eye—was Margaret Wise Brown’s The Runaway Bunny (1942), which like her later, more famous book, Goodnight Moon (1947), was illustrated by Clement Hurd. The Runaway Bunny is a darker story, however, than the one that followed; there’s a kind of comfort in it but with an edge of something speculative and frightening—the blessing and the curse of family ties. Like My Name is Lucy Barton, Brown’s The Runaway Bunny is a dialogue between mother and child. Here’s how it begins.

Once there was a little bunny who wanted to run away. So he said to his mother, “I am running away.”

“If you run away,” said his mother, “I will run after you. For you are my little bunny.”

“If you run after me…I will become a fish in a trout stream and I will swim away from you.”

“If you become a fish in a trout stream,” said his mother, “I will become a fisherman and I will fish for you.”

For better or worse, as Lucy Barton also discovers, you can run from your mother, but you can’t hide. Lucy’s mother finds her even in the labyrinth of the hospital’s tunnels whence she is whisked away in the middle of the night for an emergency procedure. And somehow, the inescapable presence of the mother is both comforting and constraining, reassuring and a bit threatening. Whether bunny or child, the mother will always track you down. For better and worse, that’s the way with families, in legend and in life. Indeed, even after a mother dies, she continues to look over our shoulder; we may glimpse her looking out at us from the mirror, and with time our own reflection becomes hers.

As Lucy’s writing instructor says, “This is a story about a mother who loves her daughter. Imperfectly. Because we all love imperfectly.”