"The concept of nature in each of these stories is something far subtler."

“Not a Thing to Comfort You,” by Emily Wortman-Wunder

"Wortman-Wunder’s stories never completely implicate or exculpate the protagonists": Hasanthika Sirisena on Emily Wortman-Wunder's debut collection, Not a Thing to Comfort You, winner of the Iowa Short Story Prize.

Western culture has long been criticized for its deeply dysfunctional, often disrupted, relationship with nature. On the one hand, we have the Christian notion of dominion, passed down to us from theologians, that tasks humanity, typically described as male, as stewards of nature. On the other hand, we as a culture use traditional notions of gender and femininity to describe nature itself. Mother Nature. Mother earth. Earth goddess. Even nature at its most forceful and most destructive is ascribed stereotypical feminine qualities. Just track the history of hurricane nomenclature in the United States. And, yet, when we scour American and British literature for depictions of individual women’s relationships with the natural world, our power is almost always revoked. As women, we find ourselves limited to a notably small plot of cultivated land: the garden, the potted plant, the manicured park and forest.

There are of course exceptions to this. Laura Ingalls Wilder and Willa Cather come to mind, and, more recently, Annie Dillard, Cheryl Strayed and Bonnie Jo Campbell. As environmental literature begins to question the fundamental distinction between human existence and the natural world, a generation of women writers have also begun to rethink our roles as passive recipients of nature’s beauty and wonder. 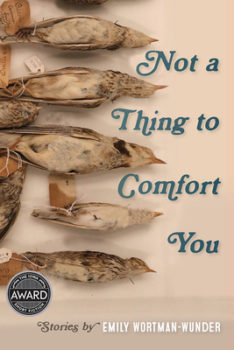 Emily Wortman-Wunder’s debut short story collection Not a Thing to Comfort You, winner of the Iowa Short Story Prize, should be added to this growing cannon of writing by women that reexamines women’s relationship to nature. But these aren’t reworkings of a hero’s journey against a rugged wilderness, the protagonist recast as a woman. No, the concept of nature in each of these stories is something far subtler, and the female protagonists are not so much struggling against nature as coming to terms with the possibility that their fundamental humanness is inseparable from the brutality of the natural world.

Take for example the opening, title story. A young nurse cares for a badly injured woman who, the opening line informs us, “crawled into town from the riverbed.” The woman arrives at the hospital unconscious, no belongings other than half an animal skull and a packet of raisins. Wortman-Wunder’s portrayal here is effective: the stranger is at once primordial being, survivor, and traumatized victim. As the story progresses, the protagonist grows increasingly obsessed with her ward. A story like this—a mysterious stranger arrives in town and causes trouble—could easily devolve into cliché, but it’s the nurse’s final act of malice, one that upends the portrait of a healer, that sets the tone for the entire collection.

The next story, “Gustav and Vera,” is a true marvel. The late middle-aged protagonist believes she has created with her ex-husband, his many ex-wives, and his current family a manicured and intricate nuclear unit, one as ornate and elaborate as the garden she ruthlessly tends and sustains. She proudly and confidently informs the reader early on: “This is my role, you see. I keep the peace.” But the protagonist’s purported mildness and equanimity are undercut by a series of suspiciously underhanded choices. By the end, her illusion of herself is neatly eviscerated by a child.

Wortman-Wunder neatly and often movingly reveals the interior mechanisms, the psyches, that drive her female protagonists to make the choices they do.

In fact, all of the stories in the collection pivot on misperception, both of self and of others, and on betrayals, some purposeful, some accidental. The superb “Bear” manages to be a masterful exercise in concision, its simple misunderstanding both affecting and terrifying. The teenage protagonists of the two finest stories in the collection—“Appletree Acres” and “Bad”— believe what they’re witnessing is freedom only to find themselves unwitting spectators, and potentially complicit, in a terrible violence. Wortman-Wunder’s stories never completely implicate or exculpate the protagonists. Instead, Wortman-Wunder neatly and often movingly reveals the interior mechanisms, the psyches, that drive her female protagonists to make the choices they do. 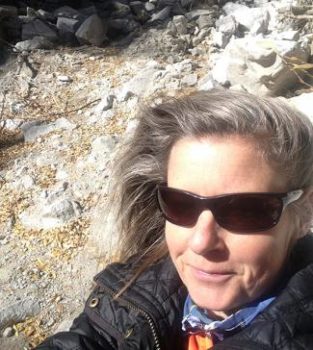 Almost every story in the collection is finely wrought. It is a collection that focuses on violence and cruelty, but the stories never feel overdone. More importantly, Wortman-Wunder doesn’t separate her protagonists from the natural world, place them either in opposition to it or working in concert with it. Instead, she carefully and thoughtfully creates characters whose personalities and choices seem at once very human and clearly woven into the fabric of a larger natural order. The one exception to this is “Trespassing,” whose fabulist conceit—a river that calls to its victims—feels a bit tired. It doesn’t quite work precisely because it makes too explicit the themes that Wortman-Wunder more convincingly explores in other stories. This is a quibble, though. The stories in this excellent collection are always gripping, near perfect in their construction, and often wondrous.

At the end of “Not a Thing to Comfort You,” the stranger leaves the animal skull as a gift for the protagonist. The final image, a skull sitting atop a piece of paper with nothing more than the protagonist’s name, acts as insult and insight and empowerment. As this collection convincingly asserts, we are not too far, any of us, from our animal selves.