"The fast pace and shifting third-person point of view remain, as do Percy's lightspeed characterization and gritty, gruesome lyricism."

Benjamin Percy is on a quest for membership in the Horror Pantheon, the right to throw back drinks with Straub and King and Rice at the Mountains of Madness. Even when writing literary short stories, Percy skirted horror’s territory, but with each of his novels he’s pushed farther into the realm of genre, that promised land of gun-milk and bloodshed-honey. Insomuch that “literary” fiction concerns itself with character first and plot second while “genre” fiction does the inverse (a retrograde and false dichotomy that begins to decompose before it’s even birthed), Percy’s first novel, The Wilding (Graywolf, 2010), kept one foot in either camp. The story delved into the domestic conflict between two of its main characters and surveyed the wounded veteran psyche of a third, harkening back to the work that earned Percy his Pushcart and Plimpton Prizes, but also incorporated a mythically large bear, a tentative step toward horror that some self-avowed literary authors might not have taken. In his second novel, Red Moon (Grand Central, 2013), he staged his first all-out assault on horror’s territory with a werewolf epic, replete with star-crossed werewolf lovers and lycanthropic politicians and nuclear fallout, but perhaps because he felt too strong a lingering need to keep one foot on literary ground, the novel’s central werewolf allegory clouded up with so many cultural and historical meanings that you could hardly see the blood for the symbolism. As Anthony Domestico noted in The Boston Globe:

Red Moon employs all the tropes and tricks of horror fiction. But Percy wants his novel to be something more, and this desire leads him to condescend to the form. Genre fiction, after all, isn’t debased or silly; it just realizes that thematic complexity and poetic lyricism aren’t all, that delight and enjoyment can be enough. It’s a shame that Percy doesn’t realize the same.

Domestico’s argument still rests on the idea of genre as literary fiction’s delightfully entertaining jester-cousin, and thereby ignores such things as political allegory in science fiction and the plumbing of the human psyche in horror, but his overall message seems correct: if you’re going to set up camp in genre’s turf, then take it seriously on its own terms. Literary fiction is, after all, just one more genre, complete with its own tropes. So which is it going to be, Percy? “Literary” or “horror?”

Another writer might have beat a hasty retreat, slunk back to the world of prestigious literary awards and tenure-track gigs, back to the tried and true tropes of realistic literary fiction. But not Percy. Percy squared his shoulders and pushed on into the hard-boiled wonderland of genre, and now he presents us with his latest venture, his third novel, The Dead Lands (Grand Central), a horror/fantasy/sci-fi reimagining of the Lewis and Clark story that successfully dispenses with much of what hampered Red Moon. The fast pace and shifting third-person point of view remain, as do Percy’s lightspeed characterization and gritty, gruesome lyricism, the sort of chops that produce starkly apocalyptic imagery such as:

This morning, as the sun rises and reddens the world so that it appears it might catch flame, Clark stands at her sentry post atop the wall. Around it reaches a burn zone of some seventy yards. Beyond this grows a forest with many broken buildings rising from it, black-windowed, leaning messes of skeletal steel and shattered stone. The remains of the St. Louis Arch, collapsed in the middle, appear like a ragged set of mandibles rising out of the earth. In the near distance, where once the Mississippi flowed, stretches a blond wash of sand.

Everything that Percy’s readers have come to enjoy is still present, but rather than build up an allegory wherein werewolves serve as the stand-in for all American minorities’ past and present struggles, he has set the story in America’s destitute future, 150 years after a super virus brought humanity to its knees just in time for the world’s superpowers to nuke it into oblivion. By some freak miracle of fiction, a cluster of humans has survived all these years since by walling itself off in a place in St. Louis called the Sanctuary. They’ve even managed to hold on to their patriotism by flying an American flag bearing one lonely star. All is going about as well as you might expect considering there’s a dwindling water and food supply, an irradiated wilderness, and a well-fed, well-bathed mayor—there’s an allegory there, though a subtler one calling to mind our economic top 1%— when a rider appears, one with solid black eyes and a letter from Oregon. From there the plot forks. In one storyline, Lewis, a bookish magician-genius and the curator of the Sanctuary’s museum, and Clark, a ranger from the wall, set out with a party of allies to meet the mysterious leader of a group of survivors in the western United States. In the other storyline, the characters left behind at the Sanctuary attempt to work their way through a morass of political corruption, police brutality, and a brewing unrest that only gets fueled by rumors of the secret expedition. Plot twists abound, and by the novel’s end the journey story explodes, like an “overlapping series of bright orange flashes surrounded by black roiling smoke run through with chunks of concrete and animal,” while the Sanctuary story implodes, “slowly knuckling in on itself like a date.” 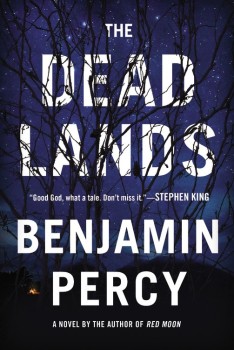 Riders and rangers and walls will ring an alarm for those currently hooked on the fifth season of Game of Thrones, and it’s no coincidence. Percy begins The Dead Lands with an epigraph from Neil Gaiman: “All stories are in conversation with other stories.” The Wilding openly drew from and referenced two novels: Dickey’s Deliverance and Conrad’s Heart of Darkness. Red Moon referenced at least three stories: Stoppard’s Arcadia, Shakespeare’s Othello, and Stevenson’s The Strange Case of Dr. Jekyll and Mr. Hyde. The Dead Lands cranks Percy’s tendencies toward homage into overdrive; it borrows/steals/refers to so many popular books that it’s nearly impossible to count them all. There’s The Hobbit and The Lord of the Rings in the companionable travelers and the wizardry and the “great eye” that beckons Lewis on. There’s A Song of Ice and Fire in the wall and the rangers and the prologue that smacks of Martin’s own. There’s a Marvel Comics system of radiation wherein exposure unlocks genetic superpowers, in this case a system of magic that functions as a consistent, if unreliable, kind of deus ex machina. There’s even a Silence of the Lambs feel to the Sanctuary’s sheriff, a mild sociopath who covers mannequins in the hair and teeth and clothing of the townswomen. Percy could have been a little subtler (might there have been something equally ineffable and menacing tracking Lewis and Clark’s progress rather than a “great eye” in a Tolkienian tower?), and at times his references feel like a vestigial need to demonstrate serious literary intent. The result is that I’m still waiting for the pure, undistilled, grueling read I know Percy is capable of, something that takes the terror in a passage like this—

She does not scream, My baby, though she knows she ought to. She only looks back to the bed, where the child lies in a nest of blankets stained with her blood and embryonic fluid, watching her curiously with eyes as black as the night that soon envelops her.

—and stretches it out into a fully terrifying, exhausting read.

However, Percy’s loving hat-tips to the genre stories he loves are also admirable and creative and have taken the author one step closer to a full and unselfconscious embrace of genre, an approach that is paying off. Not only has Percy written three compelling novels in a row, but now he’s also contracted to write the Green Arrow Series at DC Comics alongside the artist Patrick Zircher, and his TV series Black Gold, a crime drama set in North Dakota during the oil boom, is currently under development at the Starz network. In short, Percy has turned himself into a cross-medium, cross-genre success whose unabashed embrace of work outside the narrow confines of literary fiction is opening up new opportunities and allowing him to have a hell of a good time.

I graduated from the same MFA program as Percy did, less than a decade after him, and I’ve spent the three years since struggling to find my own path as a writer outside of universities. Percy, meanwhile, has soldiered ever onward and upward. So I freely admit that some of my criticism of his work might be tinted with the green lens of envy. Most recently, I’ve returned from teaching in South Korea to build a life teaching elementary students just eighteen miles from where I grew up in Missouri, and I often find myself reading genre late into the lamp-lit night. The stories of my youth call out to me from my classroom’s library, emitting the crystalline flashes of dueling lightsabers, the softly eerie atmospheres of Goosebumps, the burnt-earth odor left by a dragon’s flame. How nice it could be, how fulfilling, to allow myself to unwring my hands and follow the trail Percy blazes, out of the land of the self-consciously literary and into sweet genre Shangri-La.