The Glister, by John Burnside

What is The Glister? To my dismay as a reviewer but my delight as a reader, John Burnside’s seventh novel defies encapsulation. The title itself suggests the book’s strangeness: the word, a synonym of “glitter,” seems composed of equal parts “glisten” and “blister.” In the way it compounds beauty and ugliness, it is a microcosm of the book as a whole. The Glister is neither a straightforward horror story nor an allegory à la Animal Farm, though at times it masquerades as both. 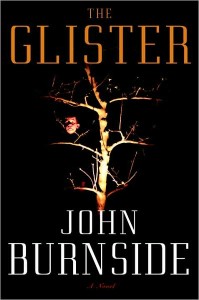 What is The Glister? To my dismay as a reviewer but my delight as a reader, John Burnside’s seventh novel (Nan A. Talese, 2008) defies encapsulation. The title itself suggests the book’s strangeness: the word, a synonym of “glitter,” seems composed of equal parts “glisten” and “blister.” In the way it compounds beauty and ugliness, it is a microcosm of the book as a whole.

The Glister is neither a straightforward horror story nor an allegory à la Animal Farm, though at times it masquerades as both. The jacket copy bills the book as something like a Scottish version of It: in a blighted industrial town on the coast, “a young boy named Leonard and his friends exist in a state of confusion and despair, as every year or so a boy from their school vanishes. . . . [T]he authorities consider the boys to be runaways. . . . And so it is up to the children who remain to take action.”

The Glister is, indeed, at times horrific. It opens with a series of chilling flashbacks in which John Morrison, town constable, discovers the first of the “runaways”—a mutilated body suspended from a branch and wrapped “in tinsel and bright lengths of fabric, like a decoration or small gift hung on a Christmas tree”—and is drawn into a conspiracy to cover up the murder. But readers expecting a Stephen King-like yarn that leaps from one fright to the next will be surprised. The Glister is not a traditional, tightly plotted page-turner, but rather a meditation—a dark, compelling, and deeply philosophical novel of ideas.

The novel’s setting seems tailored for an allegory of industrial blight. There’s Outertown, “all mock-Elizabethan and ranch-style villas with wide, miraculously green lawns and hedges”; Innertown, “a ghetto for poisoned, cast-off workers” from the now-defunct chemical plant; and finally the plant itself, “acres and acres of dead real estate,” an industrial morass that has destroyed the land around it and the lives of Innertown residents. Outertown prospers because Innertown pays the price for an immense, industrial original sin. (Readers who have driven through Gary, Indiana, on their way to Chicago may recognize the dynamic.) The temptation, then, is to read the Innertown boys’ disappearances into this relationship. 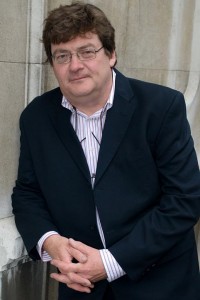 But Burnside is quick to spoil such tidy interpretations. And in many ways, Leonard—who appears a quarter of the way through the novel and narrates most of the pages that remain—is his vehicle for doing so. Precociously intelligent, ruminative, and convinced from the start that some evil is afoot, Leonard is the novel’s engine. Almost immediately, he flips any straightforward allegorical reading of the book on its head: “The thing is, I know everybody says it’s dangerous, that it’s making us all sick, that they should have razed it to the ground years ago and cleared the entire eastern peninsula instead of just leaving it to rot—and that’s all true, I know that, but you still have to admit that it’s beautiful.”

Leonard is drawn to the plant as a moth is to flame—and in part because Burnside, who is also the author of several volumes of poetry, lends his descriptive prowess to his narrator, the novel succeeds at giving his strange infatuation, his conviction that there is beauty amidst all this ugliness, convincing texture and emotional heft.

And yet Leonard is not heroic in the sense that the children of It, or those of any number of similar novels, are heroic. He is too thoughtful, too meditative, even static—a poet, not a detective. This is important to how The Glister works as a whole: Leonard is ruminative and, as the story progresses, increasingly unreliable in ways that deny the possibility of a tightly coiled plot; meanwhile, his poetic sensibility and affinity for contradiction upset any slickly symbolic reading of his situation.

So. All this by way of explain what The Glister is not. What, then, is it?

One answer is that The Glister uses the conventions of the horror genre to weave a dark atmosphere around, and provide the stakes for, questions it poses using an allegorical framework that it ultimately explodes through a resistance, built into its structure and its narration, to articulable answers.

But a better way, perhaps, of describing this remarkable and remarkably strange novel is to observe that, early on, Morrison comes across the body of the first missing body and intuits:

[T]here had been reverence here, a terrible, impossible tenderness—in both the killer and the victim—for whatever it is that disappears at the moment of death, an almost religious regard for what the body gives up, something sublime and precise and exactly equal in substance to the presence of a living creature: the measured weight of a small bird or a rodent, a field mouse, say, or perhaps some kind of finch.

To the extent that The Glister is in an investigation into the murders that set its plot in motion, its ultimate question is not whodunit? but rather an inquiry into the weight, substance, and possible non-existence of that departing finch.

There is, of course, no articulable answer. But this novel isn’t after answers. The Glister —especially in its strenuous and stunning final pages—poses and explores the biggest question of them all with vivid, lyric intensity.

It is, as the novel’s title suggests, a question that concerns beauty and ugliness: does dying mean “walking into this brilliant light, walking into the fire and disappearing into its radiance, as if it had been [our] natural element all along, sparks returning to the light, flames returning to the fire”? Or is it merely as blunt and bloody, as factual and final, as that poor boy’s body, hung in a tree?

– Read an excerpt from The Glister.

– Buy one of Burnside’s books from your local independent bookstore. Click here for The Glister.

– To learn more about John Burnside and his work, visit this page on the British Council’s Contemporary Writers site.

– You can listen to Burnside read several of his poems here at The Poetry Archive.