The Search, by Geoff Dyer

Twenty years after its initial publication in Britain, Geoff Dyer's The Search appears in American print.

British author Geoff Dyer’s fiction and essays have been lauded on both sides of the Atlantic for three decades.  Now, his second novel The Search appears in American print – twenty years after its initial publication in Britain. This coincides with the even tardier American publication of his first novel, The Colour of Memory (1989), as well as the release of his new non-fiction work, Another Great Day At Sea: Life Aboard the USS George Bush. These three simultaneous publications are a triple play for the prolific Dyer, who has recently moved to California.

In an un-named city in an un-named state that seems to be California, the events of The Search commence in time-honored detective mystery style:

The search began when Walker met Rachel. He had been hung-over most of the day and intended taking it easy that night. Then, just as he was beginning to feel better, his brother dropped by, kitted out in an off-white tuxedo, telling Walker to get changed and get a move on, he was coming to Charles and Margot Browning’s party. 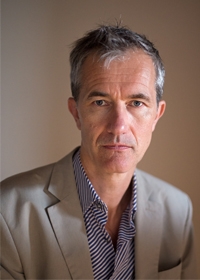 Rachel is, of course, the most striking guest at the party, a brunette bombshell. And Walker is, of course, between jobs and between romances. Sparks ignite and Rachel sends Walker off on a cross-country quest to find her missing husband in order to close a potentially costly loophole in the couple’s separation agreement. So far, so good. The reader believes she’s in familiar territory, Chandler-land, Hammett-town. Right?

Not quite. First clue? The book opens with a Kierkegaard quotation, after all: “Fairy-tales and legends often tell of knight who suddenly catches sight of a rare bird of which he then sets off in pursuit. . . The knight. . . is lost in the wilderness in which he now finds himself.”  Next clue? Fernando Pessoa: “I found myself. . . passing through towns which were not this one, even if neither this one nor that one were towns at all. . . ” Readers who’ve traveled with Dyer before will know at once not to strap in  for a hard-boiled mystery but rather for a magical mystery tour.

. . . the rain was falling so heavily that it was impossible to see the road ahead. One wiper had given up and twitched helplessly in the downpour. Walker bent forward, peering through the windshield at a truck swimming towards him. The windshield was ablaze with light and then, as the truck passed, there was a blind drench of spray. He braked and felt the car slither. . .

But Walker also traverses his interior territory, too, a zone somewhere between real and imagined experience. Consider the names of the towns he passes through: Juicetown, Sweetwater, Horizon, Despond.  This is Pilgrim’s Progress meets Easy Rider.  Dyer says in his afterward to this edition that his Italian publisher called The Search a “metaphysical thriller.” That is an apt description. The tone of the narrative expands and contracts, combines action with illusion—and allusions to art, film, and especially literature. The reader becomes almost distracted by the game of spotting the references from Calvino to Dante.  And Dyer refuses the conventional thriller’s unrelenting, breakneck pace. Instead, he varies the rhythm and the tempo; he riffs on his themes. The author’s award-winning collection of essays about jazz, On Beauty, immediately preceded this novel, and we hear music in The Search as well, particularly Dyer’s artful use of pause and beats of silence in the midst of action.  Here, for example, Walker enters a diner as still and frozen as the Hopper painting it evokes:

“He came to a corner diner and stepped inside. The Naugahyde seats held patches of sunlight, the windows merged dim reflections of the scene inside with the cars out in the street. . . the diner was almost empty. A lone drinker sat at the bar, watched by the bartend, wiping glasses. A couple of people sat at tables on their own, one of them reading a paper. Loneliness pervaded the place.  Over by a window a waiter had just poured a cup of coffee for a man eating an omelette, knife raised as if to say when.”

Later, Dyer employs another such moment of suspended silence, resonant quiet beyond the noise of action, to conclude the novel.

Perhaps ironically, given the long delay before State-side publication, Dyer wrote The Search here in New Orleans, as he recounts in an interview with The Paris Review. He loves being in America, “away from the radioactivity of British class.”  In a recent essay in The London Review of Books, Dyer writes that he relishes the “amazing light and weather” of his new home in Venice, California, where a stroke recently caught him by surprise, mid-life and mid-career. Nevertheless, as seemingly indestructible and indefatigable as his protagonist Walker in The Search, he filed a piece from his hospital bed and  upon discharge hopped back on his bicycle.  He revels in “being where I’ve always longed to be, perched on the farthest edge of the western world. . . Life is so interesting I’d like to stick around forever, just to see what happens, how it all turns out.”  As a reader come late to the Dyer party, I’m curious to see what he makes of whatever happens next.