The World Without You, by Joshua Henkin 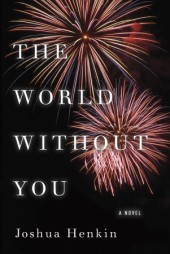 The World Without You, Joshua Henkin’s third novel, takes place over the July 4th weekend in 2005. The Frankel family, more than a dozen members in all, descends upon their summer home in the Berkshires from all parts of the country (and world) to commemorate the youngest sibling, Leo, a journalist who died exactly one year earlier at the hands of terrorists in Iraq.

Various subplots, concerning no less than eight major characters and nine minor players, bubble to the surface. The elder Frankels, David and Marilyn, are splitting up. Leo’s widow, Thisbe, and their son camp out in the basement, while Thisbe debates how to tell her former in-laws about her new boyfriend. The youngest sibling, Noelle, the last to see Leo alive, flies in from Israel, dragging in her wake four children and a misfiring marriage. Middle sister Lily, the closest to Leo, harbors an immense grudge against Noelle. The eldest sister, Clarissa, and her husband are consumed by infertility. And there’s a rich grandmother, lurking off-stage on the Upper East Side of Manhattan.

If you’re expecting a ruminating, 300-page crawl through the long weekend, think again. Despite the short chronology, Henkin moves briskly. This might be due to the multiple, third-person narration of the major characters. It’s an ensemble cast. The chapters shift from Frankel to Frankel, giving the impression of significant movement despite a compressed passage of time.

This strategy prevents any one character from dominating the action. But shorter, multiple perspectives (of different events; this isn’t The Thin Blue Line) also prevent one from becoming fully immersed in the characters. There isn’t enough time for serious, deep introspection. After becoming involved and getting to know one Frankel, Henkin moves on to the next. On paper—or the dust jacket—the most interesting one of the bunch is Leo, a character tailor made to fulfill the adage “only the good die young.” Leo—the wild sibling—took in stray dogs, fed the homeless, smoked too much pot, and was, by all accounts, too smart for his own good. Restlessness led him to journalism. He covered the Iraq war and died a horrific, public death as a result. A series of family reminiscences comprise his character, which flattens him a bit. The things people say about people who are dead usually offer little of the personal, and scant criticism of the dearly departed.

Leo is the story’s lynchpin, but there is no central protagonist, so the action moves between the eight principals, each experiencing individual crises over three days. At times the pace is unrelenting—perhaps appropriate for spending time in a house full of more than a dozen characters. There are some lulls where Henkin intertwines beautiful moments, like when Marilyn tries to clear her head the night before everyone arrives:

She breathes slowly, in and out. She hits serve after serve into the empty opponent’s court, taking something off the second serve, putting more spin on it, then returning to her first serve, hitting one ace after another. She serves into the deuce court and the ad court and the deuce court again. She empties one bucket of balls, and now she returns with the other bucket. Occasionally when she serves, her ball hits another ball lying in the clay, and they bounce off each other. There are a hundred and fifty tennis balls now, maybe two hundred, the court covered in fuzz the color of lime. Sweat drips down her forehead and singes her eyes. She simply leaves the balls there and returns to the house.

These instances, though sublime, are infrequent. The result is that the characters come to be defined by their problems: David and Marilyn are the divorcing middle-aged ones, Thisbe hides the secret boyfriend, Clarissa is infertile, Noelle (formerly the libidinous one) is the right-winger, and Lily, the lefty.

Henkin favors action over introspection. It’s the opposite of something like Richard Ford’s Independence Day, which somehow, through pages of digressions on seemingly unrelated topics like real estate trends in Haddam, New Jersey, projects an incredibly vivid, and focused, picture of Frank Bascombe.

This is too bad, because the Frankels have great potential. Take Marilyn. She’s a medical doctor. After she lost her son, she became a Cindy Sheehan-like crusader in the antiwar movement, campaigning against the Bush administration and the Iraq War in The New York Times and Jerusalem Post, to name a few. She’s splitting with her husband because of Leo’s death—or maybe it was her obsessive activism—or another reason entirely. Marilyn is opaque, brilliant, a little unpredictable, and doesn’t suffer fools. She’s utterly captivating.

Instead, the Frankel family, en masse, is the protagonist. Henkin presents an admirable, loving sketch of a wealthy, educated, American family that uses the word “summer” as a verb and has experienced its fair share of turmoil and tragedy. Despite the fact that they resolve many of their individual and shared crises, the Frankels don’t change much themselves. The World Without You hangs on the idea that families need to stick together, especially through loss. A worthy sentiment, but a familiar one, too.