The Zenith by Duong Thu Huong

Huong's sixth novel in translation imagines the final days of Vietnam's Ho Chi Minh in a project of Tolstoyesque landscape and character. 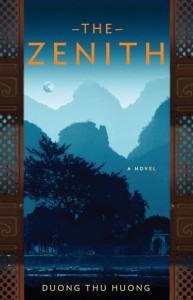 Fiction writers take risks out of necessity. Some of our best-loved writers have succeeded by pushing both their material and craft farther than anyone before them. But for some, the stakes of this risk-taking carry the threat of real harm. Banned or exiled writers often put their lives on the line for their words. When the price of literature becomes that high, so does the pressure for each word to merit the enormous risk the writer takes to speak out.

Duong Thu Huong is an imposing figure in Vietnamese literature, and not only because she has made such sacrifices for her work. Her 1993 novel, Paradise of the Blind, was the first Vietnamese novel in translation published in the United States, and she is considered the most widely read Vietnamese writer in the world. Once imprisoned for being a “dissident writer,” she lives in forced exile in Paris. Vietnam has banned her works.

She wrote The Zenith, her latest novel and her sixth in translation, in Paris, and perhaps this distance from her homeland facilitated what critics have called her boldest work yet; in the words of one, it is “the Doctor Zhivago of Vietnam.” Researched for many years, the book centers on Ho Chi Minh, the father of the nation. “Mr. President,” the central character, is never named, but Huong makes clear his identity. Even though Huong’s imagining of Ho Chi Minh is a deeply sympathetic one, rendering his fictional form, replete with human failings, is considered just as blasphemous by some of his followers as portraying a religious prophet or god. The risks Huong takes with this novel are considerable.

Though the book includes other perspectives, Huong focuses on Mr. President’s final days after the outbreak of war with America, when his followers spirit him away to the mountains for safety. The narrative also provides a prism to view the crimes surrounding the beginning of a new nation, and how they determine the fate of generations. In a portrait both compassionate and complicated, Ho Chi Minh of The Zenith wrestles with deep regrets and longings that have little to do with politics. Much as Hilary Mantel in her Cromwell books, Huong makes the historical personal.

However, because of his carefully constructed legend, it’s not always clear how much of Huong’s portrayal is fiction and how much is fact. The Vietnamese government insists Minh was celibate, and to say otherwise is sacrilege, though historians have learned that he did have a wife in China. Indeed, this conflict contributes to one of the major storylines in The Zenith. When we meet Huong’s Minh, the Politburo’s torture and murder of the woman he loved plagues him with guilt. In the opening pages, he hears a boy calling for help and recalls the voice of his own son by that woman. Huong weaves the intimate proportions of Mr. President’s remembered tragedy and gloom into a grand history of corruption, greed, and the manipulation of power at this pivotal time in Vietnam’s history. Five sections comprise the novel, alternating between the President and an array of characters from different layers of Vietnamese society. But Minh’s story holds the scale and ambition of the project aloft. The prose, though lyrical and lush, can sometimes feel heavy with the writer’s authority and the darkness of the events. But this heavy quality enhances the reading: one has the sense of a Tolstoyesque breadth and depth of both landscape and character, and this defies a light hand.

The Zenith represents a tour de force from an important writer taking great risks, political and literary. Beginning with a bold initial premise, Huong follows through with an epic on an impressive scale that does that premise justice.