"Marian is everything I’d like a hero to be—resourceful and whip-smart, imperfect and impassioned. "

"The novel’s primary storyline begins approximately where Mawer’s last novel, Trapeze (Other Press, 2012), left off. Marian, who in Trapeze parachuted into occupied France as an undercover agent, is now returning to England at the end of World War II."

There are two present-day chapters in Simon Mawer’s Tightrope (Other Press, November 2015), and they stand one at either end of the novel. The first has ex-spy Sam Wright arriving at the home of ex-spy Marian Sutro. Though Sam hasn’t seen Marian in years, he remarks that she “was still a consummate actress.” As for Sam’s purpose, we know little more than what he admits to Marian: he’s been “dragged out of retirement” to “tie up loose ends.” When she greets Sam by saying, “It must be almost fifty years,” he notes:

She’d done her homework. Get your story by heart. Make sure it’s consistent. Make sure you don’t have to think about your replies. But don’t be too accurate. Being too accurate is suspicious. “Fifty-one,” I said. We kissed, on both cheeks.

I like the delicate nature of Sam’s correction, his insistence on being the one with the facts. Then again, as we soon learn, Sam’s expertise is more than factual. In this same scene he tells us:

She was the first adult I ever called by her Christian name, the first adult who ever seemed to regard me as a person to respect rather than a child to be condescended to, the first adult with whom I’d had an adult relationship. Somehow, whatever our difference in age, I’d always felt her equal.

But the curtains close on this scene before much more is revealed about Sam and Marian, nor even where their conversation heads, and the novel’s primary storyline begins approximately where Mawer’s last novel, Trapeze (Other Press, 2012), left off. Marian, who in Trapeze parachuted into occupied France as an undercover agent, is now returning to England at the end of World War II. She’s survived capture, imprisonment, and interrogation at the hands of the SS. She spent time in a concentration camp. The novel establishes its rhythm and tone as Marian attempts to rebuild her life—if attempts is a fair word to use on a character whose spirit has been so thoroughly broken that the clothes in her childhood bedroom “hang like flayed skins in the quiet shadows of a wardrobe.” I sensed Marian’s hopelessness best in brief, plain moments like this one, and in others such as, “She tried a shrug but she had lost the knack of it.”

Slowly—but not so slowly that the novel’s pace drags—Marian regains her footing. And just as slowly—which is to say, just as inexorably—she’s drawn again into the world of subterfuge and political tensions. She’s appalled by the United States’ use of nuclear weapons. She does not think war with the Soviets is unavoidable, as many of her contemporaries do: in one memorable scene, she literally stands up to challenge Bertrand Russell at a speech in which he argues for swift and decisive war on Russia.

Marian is everything I’d like a hero to be—resourceful and whip-smart, imperfect and impassioned. And her story is nothing short of gripping. Part of what makes it gripping is, of course, the blackmail and the treachery, the traitors and the spies, the impossible puzzle of who knows what, who’s running whom. Alone, these components would make Tightrope a good airplane read, absorbing enough to distract from the engine roar. But there’s more here: inconsistencies, passions, insights. The strangeness of “the uncertainties of peacetime after the certainties of war.” Beyond the plot, we learn to care about the who; beyond the who, we learn to care about this time and place.

We also learn that the novel’s intimate close-third is Sam himself. He even starts appearing in the story. Like most good devices, he’s incidental at first, but as the novel progresses, Sam appears more frequently. He never quite becomes a main character, though it’s clear he always wanted (indeed, wants) to be one, at least in Marian’s life. Still, to give him some credit I’m sure he’d like, he’s crucial to the plot (of course I won’t say how). Even more importantly, he’s crucial to the slipperiness of truth in Tightrope: undoubtedly he’s got to be making up parts of Marian’s story. In that opening chapter, when he first sees Marian again, Sam notes, “Beauty was no longer evident but rather something to be inferred.” We could say the same of truth in Tightrope: it’s there all right, though its having to be inferred (by Sam) doesn’t make it any less true. Or does it? You wonder at some point where inference turns into invention, and how many liberties invention has taken. 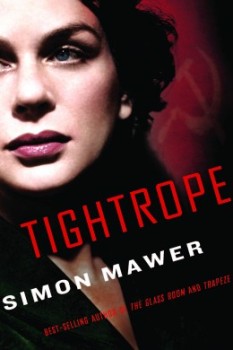 And then there’s all Sam’s hedging: he’s doing an awful lot of approximating when it comes to his own story. Sam tells us how he wheedled his way out of school commitments to see her: “With some difficulty I extricated myself from a sketch that I had been rehearsing. Family reasons, I explained mendaciously. My aunt is ill. Something like that.” Something like that: the phrase stands out as a sore thumb of uncertainty in an elsewhere certain narrative. And later, when he’s at a reception with Marian, and she approaches a Soviet diplomat with a question—this causes a brief ruckus—he says he doesn’t know what she said. He simply couldn’t make out the words, and—more importantly—he doesn’t recreate them now.

Though he claims over and over that Marian is fundamentally unknowable, Sam knows a whole lot about what he wasn’t there for. But he can’t even look at his own relationship with her without confusing, hedging, guessing. Or pretending to. At some point we remember that Sam was dragged out of retirement for this present-day interview—there’s more than a hint, at the start of this novel, that he’s been involved in this game, or at least very similar ones. But does this make him untrustworthy? Not necessarily. Perhaps, contrary to what we tell ourselves, we know others best except in relation to ourselves. Tightrope seems one argument for that, anyway.

When we return to present-day Sam and Marian at the end of the novel, there’s a well, that’s that attitude to them both. We have no idea what she told him, but by now we can guess. It was close to the truth, but not the truth exactly, which is why we needed Sam, as well as why we doubt him. We could borrow a metaphor and say that Sam’s telling of Marian’s story was a tightrope walk, and that his narrative was supported on either side by the present-day chapters. But I’m not convinced his feat was all that precarious. This is not to say there wasn’t art involved—simply that the metaphorical poles supporting the metaphorical tightrope are no more than a narrative frame, and a frame, by definition, supports and protects what’s inside it. And we ought to remember that Sam built our frame, and that he’s the one who filled it.

We could even go so far as to imagine a frame that, upon closer examination, reveals itself to be of a piece with the art it supposedly holds. Is it still a frame? Or: is there a frame at all?