Even the idea itself is intriguing: pair twelve international illustrators and short fiction writers, press go, see what happens. The slim, wonderfully designed collection We Are the Friction sets the stage for unexpected relationships. Following their 2008 collaboration, I Am the Friction, the masterminds behind the concept are designer Jez Burrows and illustrator Lizzy Stewart, who together form Sing Statistics. Both Burrows and Stewart are based in Edinburgh, but the two-dozen writers and illustrators in this anthology reside across the globe – from Toronto to Kansas City to Barcelona. The cover promises a veritable garden of earthly delights: "5 Giant Animals, 63 Expletives, 6 Instances of the Ocean," and "1 Sentient Muffin" among them. Let’s begin with that muffin. 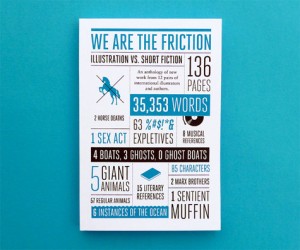 Tao Lin’s two-and-a-half page (the type is small) “The Vegan Muffin” gets inside the mind of a hyper-aware baked good. The story opens with:

The muffin worked at NASA. Her ingredients included spelt, agave syrup, and vanilla. She was a vegan technically because she never ate. 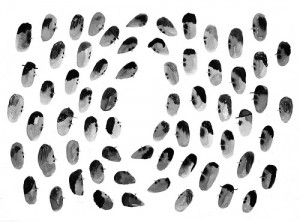 The Vegan Muffin, by Nous Vous

These three sentences illustrate one of the pleasures of an anthology of short fiction. If they were the opening of a 300-page novel, this reader may, may, have thought, “Hmmm, this is not the book for me.” But the small investment of time required to read a piece of short fiction means one easily overcomes the natural prejudices of taste or mood. Tao Lin’s story rewards the reader with a fable of modern connection and disconnection. Paired with the story is the work that inspired it, an illustration by Nous Vous (itself a collection of four artists) portraying what loosely resemble thumbprint portraits of NASA employees staring into a white void at the center of the page. Food for thought indeed. 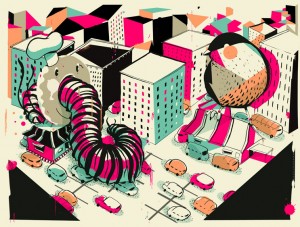 Keeping with the baked-goods theme, Ryan Boudinot’s “Free Donuts” arrives like the love child of George Saunders and John Cassavetes. This time around, an illustration by Pietari Posti served as inspiration. In peach, sea foam green and fuchsia, a giant worm and bird appear Godzilla-sized atop a donut shop and restaurant, respectively. Within Boudinot’s story, the Helmers family is pinned like butterfly specimens in a cinéma vérité vision of the suburban strip-mall where they wait in line for hours for free donuts and giveaways like donut man bobbleheads. The story captures the absurdist mood of the drawing in the family’s outsized emotional reactions to the most trivial of slights, winding up in a complete meltdown. 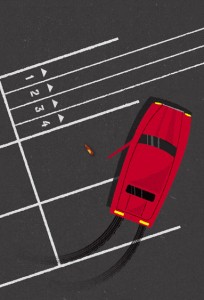 Since the Layoffs, I

Then there is Dan Kennedy’s brilliant diatribe of a man who has been laid off from his job, with the informative title “Since the Layoffs I’ve Started Drinking and Jogging.” Frank Chimero’s illustration sets the scene for personal implosion. Kennedy builds tension with a master touch: as the protagonist jogs while dissecting his unraveling life, he glares at some women crossing the Stewart’s Food Emporium parking lot and thinks “What are you dirty bats going to do?” I actually laughed aloud at the line. It’s been a while since a book – let alone three-page story – has so completely charmed me. 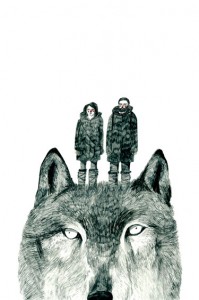 Lizzy Stewart illustrates the story “Thaw” by Sean Michaels. Stewart’s meticulous pen-and-ink drawing, with a cool hint of red, captures the two main characters atop the head of the wolf they keep seeing as they run, seemingly without purpose or end, through the tundra. She gets at not only the essence, but also the mood, the temperature of the story:

They ran as fast as they could over the ice. Even when the sun was low in the sky and they were in their fur boots, panting, feet landing on the spines of ravines or in the slick bellies of what had once been pools. 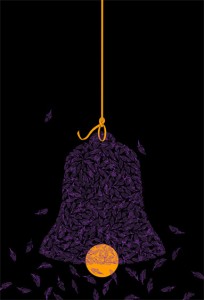 In Caren Beilin’s piece, “My Violetation,” she riffs on the mythological and psychological pull of violet, tracing the color as it finds mention in the texts of the Liang Dynasty, the poetry of T. S. Eliot, the compositions of Richard Wagner, and, of course, Edgar Allan Poe’s spine-tingling “The Masque of the Red Death.” The idea of inspiration from another artist’s work clearly helped generate this compendium of a hue. Verity Keniger’s violet-feathered bell provides an appropriately eerie counterpoint.

The collection’s numerous jumping off points reminded me of the Creative Commons ethos, or collaborative innovators like Jonathan Lethem and his Promiscuous Materials project. We Are the Friction invites a third collaborator into the mix: the reader. The stories and illustrations provide a beautifully executed sketch of an idea, a mood, a relationship that leaves the reader imagining the periphery of the story, what comes before, what after. Some work better than others, but that, I suspect, is a function of individual taste and would be entirely different for another set of eyes.

Together, the twelve pairs of authors and illustrators pay homage to inspiration, and celebrate the collaborative nature of art. Readers have always been mindful of influence, the Biblical diction of Faulkner, or the Homeric echoes in Joyce, but rarely is the inspiration laid bare so clearly on the page. It creates an entirely new pleasure to study the illustrations firsthand and consider the visual sensibility informing the literary, and vice versa. Some pairings harness this symbiosis – Roald Dahl and Quentin Blake, for example, or the 1930 Rockwell Kent-illustrated Moby Dick – but few works show such a range of interpretation. And the vastly different styles are arranged in ways that invite further speculation, rather than shutting off the valve of imagination. We Are the Friction has a limited press run of 1,000, so get yours while you can. If they sell out, perhaps Sing Statistics will set forth to create a third volume of provocative pairings…

– Read Jonathan Lethem’s piece on influence and creative collaboration for Harper’s: “The Ecstasy of Influence.”

– Peruse, with the chance to purchase, limited edition prints of the illustrations in We Are the Friction.

– View the Flickr set of the We Are the Friction exhibition in Edinburgh.