Book of the Week: The New Valley, by Josh Weil 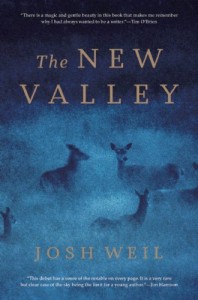 This week’s featured title is Josh Weil’s story collection The New Valley. Weil was born in Roanoke, Virginia, to a family of would-be “back-to-the-landers.” With an agronomist father and a mother “deeply attuned” to nature, it comes as no surprise that Weil pays such careful attention to the natural world in his writing. The New Valley (Grove Press, 2009) was a New York Times Editors’ Choice selection. The book also won the Sue Kaufman Prize for First Fiction from The American Academy of Arts and Letters, the New Writers Award from the Great Lakes Colleges Association, and a “5 Under 35” Award from the National Book Foundation. Weil earned his MFA from Columbia University and has received a Fulbright grant and fellowships from the Bread Loaf and Sewanee Writers’ Conferences.

Weil recently sat down with contributor Mary Westbrook to discuss his collection and the writing life. Here’s an excerpt of Weil discussing character:

Some of the best advice I’ve heard is to find the wound in the character. That’s where the story is. Take Osby [the main character of “Ridge Weather”]. He feels his life has no impact. He’s deeply alone and impotent in his life. That’s a terrifying feeling. That’s his wound. But if he were able to articulate that fear, it would take the air out of the whole story. I don’t think people work that way. If people can identify their wound, they can usually heal it. I don’t want to imply that it should be to a very specific thing. If the wound becomes too exact or pinpointed, it can be claustrophobic in the story.

In our archive, you can read the rest of Westbrook’s interview with Josh Weil, in which Weil discusses his MFA experience at Columbia, the two paths that draw people to writing, and how to ignore bad, if well-intentioned, advice.

You can also win one of three signed copies of the book, which we’ll be giving away next week to three of our Twitter followers. Due to new policies about using Facebook for promotions, we have decided to move our BOTW giveaway to Twitter. If you’d like to be eligible for this giveaway (and all future) ones, simply click over to Twitter and “follow” us (@fictionwriters).

To everyone who’s already a follower, thanks again! Both our Twitter and Facebook pages exist, in part, to feature the work of great new writers and what’s happening in the literary world. But our primary goal for everything we do is to put books we love in the hands of readers. Literally, in this case.