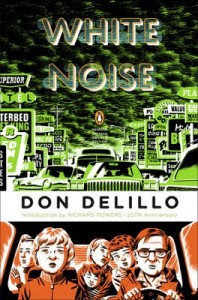 Vernerable publisher Penguin has quietly been putting out a series of “Graphic Classics”–classic novels such as Moby Dick and The Three Musketeers with snazzy covers by prominent graphic artists.

Over at his blog, illustrator Michael Cho discusses designing the cover for the recent reissue of Don Delillo’s White Noise:

The first thing I did, of course, was read the book again. It had been over 10 years since I last read it, so I needed to re-familiarize myself with it. After reading it though this time, I skimmed it again but with an eye toward the major concepts and images. Then I sat down over a few nights and thought about what the book meant to me.

You can see more of the graphically-enhanced covers on the Flickr page of Paul Buckley, Penguin’s art director. (Dharma Bums, Huck Finn, and Frankenstein are especially great.)

And, for more gorgeously re-covered classics, check out the “Couture Classics” on the Penguin website, featuring Wuthering Heights, and The Scarlet Letter with covers by fashion illustrator Ruben Toledo.