How to save a library? With postcards–and some attitude.

Last summer, I worked a few blocks away from the regal main branch of the New York Public Library near Bryant Park. During the interlude between the end of the work day and the start of a class I was taking, I’d sometimes take refuge in the humbling building, its architectural beauty and breathtaking murals never ceasing to amaze me. So when I came across the story of a young girl aiming to keep the city’s libraries open by writing comical postcards to New York City Mayor Michael Bloomberg, I was not only amused but also grateful that someone else, too, couldn’t imagine New York without its famed literary landmark.

The tween, called “Tara” by New York City public librarian and “Screwy Decimal” blogger Rita Meade, drafted a series of postcards with creative threats to Mayor Bloomberg when funding for the city’s public libraries was in jeopardy late last month.

Here’s one of them: 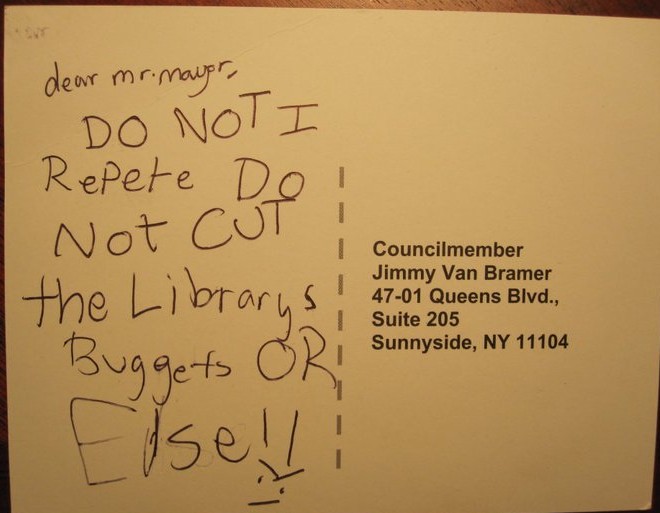 Councilman Jimmy Van Bramer of Sunnyside, Queens, initiated a postcard campaign to express to Mayor Bloomberg how important it is that the libraries continue to receive full funding. Librarians and library supporters had people fill out and collected the postcards.

And while Tara’s intimidations might have been cause for concern if they hadn’t come from a ten-year-old girl, the motive behind them was simply a love for books and the city’s public libraries. So I’m sure Mayor Bloomberg wasn’t alarmed once he realized this most innocent of intentions.

On her blog, Meade chronicled several of Tara’s postcards. In another postcard draft, Tara wrote that she would organize a school protest: 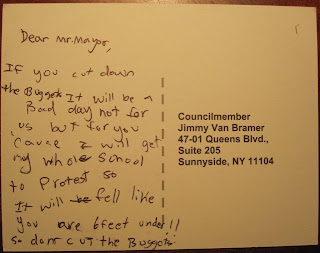 Well, I thought the idea of a school protest was wonderful, so I was completely in Tara’s corner until the ‘six feet under’ comment. (Which was followed by maniacal laughter on Tara’s part, by the way.) Since she had escalated her message from a vague threat to more of a thinly-veiled threat, Tara scrapped that postcard and filled out yet another one.

After yet another draft that included Tara writing that she “will scream [her] bloody head off and put it on a golden platter” if the library system’s budget is reduced, Tara and Meade settled on a final postcard:

Lucky for Tara and other public library lovers, the New York Public Library system, which was facing a $40 million funding reduction, ultimately was not put on the chopping block. But even after hearing the good news, Tara wasn’t ready to give Mayor Bloomberg a break just yet. After learning her library branch would remain open, Tara said:

“Bring it ON! Let’s see this mayor. If he comes here, I’m gonna give him a piece of my mind.”

“I couldn’t help but laugh, even as I explained that the Mayor and City Council voted to restore most of the library’s funding. (Although, truth be told, I wouldn’t mind someone giving the Mayor a piece of his/her mind for doing this ridiculous budget game every year.)

Thank you, Tara, for defending the New York Public Library, your humor, and your steadfast desire to keep reading. The next time I’m in New York walking up those magnificent marble steps, I’ll think of your postcards, laugh quietly to myself I’m sure, and have a new appreciation for the city’s literary gem.