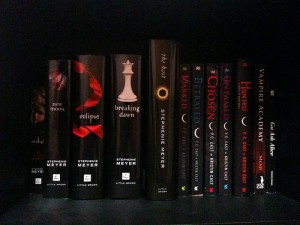 How do you know when vampire lit has reached critical mass? When it gets an academic conference. Vampire literature is now receiving some scholarly attention with a conference at the University of Hertfordshire in the UK. Despite the smirk factor, the conference—”Open Graves, Open Minds: Vampires and the Undead in Modern Culture”— has some serious intellectual heft:

The aim of the conference is to relate the undead in literature, art, and other media to questions concerning gender, technology, consumption, and social change. […] The irony of creatures with no reflection becoming such a pervasive reflection of modern culture pleases in a dark way. Since their animation out of folk materials in the nineteenth century […] vampires have been continually reborn in modern culture. They have stalked texts from Marx’s image of the leeching capitalist, through Pater’s Lady Lisa of tainted knowledge, to the multifarious incarnations in contemporary fictions in print and on screen. They have enacted a host of anxieties and desires, shifting shape as the culture they are brought to life in itself changes form. More recently, their less charismatic undead cousins, zombies, have been dug up in droves to represent various fears and crises in contemporary culture.

“I wanted to put [the texts] in the setting of a rigorous academic conference on vampire fiction to prove that you can study popular literature in a serious way. When I teach my students 18th-century and Renaissance literature, they sometimes struggle to connect to it. But they’re always talking to me about Twilight and its ilk, and I thought the wealth of subject matter in vampire lit made it a perfect way to study popular literature on an academic platform.”

Scheduled sessions include “The Good, The Gay, and The Glamourous: Modern-Day Reinterpretations of the Vampire Myth in Young Adult Fiction,” “Undead, Unwed, But Not Unread: Vampire Fiction and Chick-Lit,” and “‘You are the most dangerous creature I’ve ever met.’: Female Sexuality as Monstrous in Stephenie Meyer’s Twilight Series.”

And, as if that mashup of vampire + academia wasn’t enough, The Guardian reports that George plans to launch a master’s degree in vampire literature in the fall. The conference’s best papers will be anthologized and used as a textbook for the program.

Before you laugh too hard, Harvard offers an English course on science fiction and Yale’s Near Eastern Languages and Civilization department offers “Egyptian Magical Texts.” Could a class on vampire literature really have been far behind?

Stories We Love: “The Rapture Index,” by Molly Reid