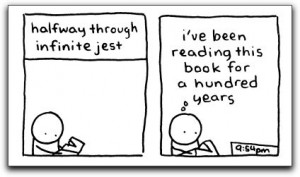 Slate reports on Infintesummer.org, a reading-group/support group combo for those grieving David Foster Wallace‘s death and those wanting to tackle his masterwork. The challenge:

Join endurance bibliophiles from around the world in reading Infinite Jest over the summer of 2009, June 21st to September 22nd. A thousand pages1 ÷ 92 days = 75 pages a week. No sweat.

Posts range from in-depth analysis of Wallace’s themes to close readings of favorite passages to humorous accounts of how people react when they see you toting around this giant book. (Really!) If you want to join in the fun, you’ve still got almost two months to catch up.