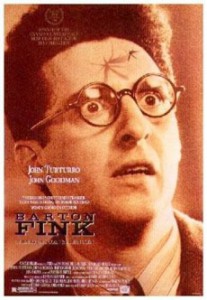 I first watched Barton Fink years ago in Chicago, and wasn’t sure what to make of it. It’s one of the Coen brothers’ lesser-watched films. John Turturro plays the title character, hired to write a Hollywood script, and his rendition of writer’s block still makes me want to crawl out of my skin. The wallpaper peels, his neighbor Charlie at the Hotel Earle (a genius turn by John Goodman) interrupts him, Barton loses himself in a picture of a woman on the beach that hangs on his hotel room wall. People may debate the symbols of the movie itself, but its the overall mood that gets me every time. The paralysis of good and bad advice unheeded, the depth of our ability to lose focus, the inner struggle that often supersedes simply sitting down to write, the endless expanse of time, the utter finiteness of time.

Anyone who has struggled against writer’s block will probably feel supremely uncomfortable watching Barton Fink’s progress. The film also provides a foil to the more selfish elements of writing in the character of Charlie, but I won’t spoil it for you.

All this came to the fore over a visit home for Thanksgiving. I find there is nothing so distracting as being among the physical detritus of your past. I really like the “Hack your way out of writer’s block” list pulled together by Merlin Mann over at 43folders. Some of my favorites:

Sometimes all it takes is saying “No adjectives for the next three pages.” What are some of your tricks to overcome Barton Fink-syndrome?