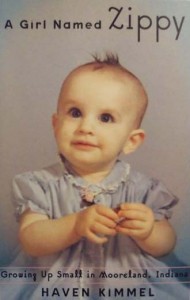 You know that moment in life when you realize that stories of the things that loomed large in childhood — your terror of the woman who lives next door or your absolute certainty that some of the playing cards in a deck are female and some, male — can be condensed, as if through a trash compactor, into little nuggets of pure cuteness and innocence that you can then hand to others for the rest of your life in one long show-and-tell, knowing they are obligated to laugh nostalgically and then hand you theirs?

Actually, I don’t know quite what or when that moment of realization is, but we must all go through it to get to adulthood, because we all have those anecdotes to share — the things we were afraid of, the things we were sure of — told now with the requisite amused adult chuckle and shake of the head.

A Girl Named Zippy (Doubleday, 2001) is a collection of these from the life of Haven Kimmel, and where you might expect to find them cloying in bulk, they are anything but. Maybe she just tells them better than most people. Or maybe she has better, funnier stories. Or maybe she does a better job of keeping the events to the scale of childhood perception. She doesn’t use much of an “I know so much better now” voiceover, which is refreshing.

But I think her success has the most to do with her always having seen herself as a character. The caboose in her family, late to talk and late to grow hair, little Zippy seems more like her family’s mascot than their third child, and even as a kid she seems to know she has more leeway and can exist more languidly in her childhood fancies than perhaps her siblings were able to. 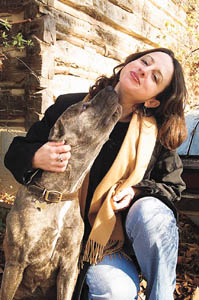 Haven Kimmel with her dog, Cloud / photo by Greg Plachta

It helps that she has parents who seem to enjoy her and share in her delight in just making stuff up. For no apparent reason, they tell her she was adopted from a family of gypsies (traded for an especially nice bag), even though you have only to look at a single baby picture to know it’s a lie. Her dad’s a bit unhinged, and her mom exhibits signs of depression, but their affection for Zippy and their taste for the absurd are such constants that somehow this still manages to be a book about a happy childhood, without sanitizing or idealizing it. Two steps over in tone and this could have been a different kind of memoir (think Julia Scheeres’ Jesusland). But being essentially down with the goofiness and even the trials of youth is what makes A Girl Name Zippy unique and so worth giving yourself over to.

I envy everyone who still has this book ahead of them.

Read an excerpt from (and further browse) A Girl Named Zippy via the publisher’s website.