[rumors] Might Say You're One of Them be the next Oprah pick? 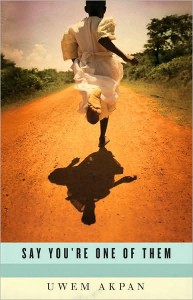 This is strictly gossip at this point, but another FWR contributor whispered in my virtual ear that the debut collection by our friend and former classmate Uwem Akpan has a shot at being the next Oprah’s Book Club selection.

Others across the blogosphere are also betting on Say You’re One of Them as a strong possibility: Thom Geier at Entertainment Weekly (who named the debut collection the top fiction title of 2008), Gwen Dawson at Literary License, and Ron Hogan at Media Bistro, who points out that Oprah has never picked a short story collection before. (On Twitter, Oprah’s clues to the next book she’ll announce were its retail price – which matches — and the fact that she’s “never made a selection like this before.”

If you missed it last November, read Jeremiah Chamberlin’s interview with Uwem in Granta.