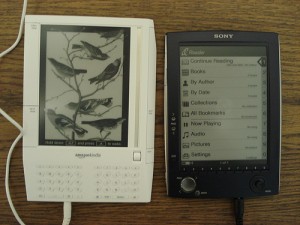 Most of the talk about e-readers centers on full-length books. But The Atlantic has recently worked out a deal to publish a series of Kindle-only short stories, each retailing for $3.99. It’s the literary equivalent of a pop single.

Six stories have been published so far, by authors such as Jennifer Haigh, Curtis Sittenfeld, and Paul Theroux. Here’s a description of Patricia Engel’s story “The Bridge”:

Available exclusive to the Kindle, “The Bridge,” by Patricia Engel, is the story of Carlito and Reina, a brother and sister from Miami. When he was a boy, Carlito was thrown from a bridge by his distraught father. Saved by a fisherman, Carlito was treated with special care throughout his life: no one bothered him about school, about his manners, about beating up his sister. Years later, when he found out his girlfriend was unfaithful, Carlito threw her baby off a bridge. Murder is Carlito’s inheritance, people say, and he is paying the price, languishing on death row at Florida’s South Glades Penitentiary. Only his sister, Reina, refuses to abandon him, visiting him every weekend to preserve his humanity, and to drive away her own terrible secret. “The Bridge” combines the lyricism of a Gabriel Garcia Marquez with the stripped-down realism of a Raymond Carver to produce a story that will sadden readers’ hearts while expanding their souls.

Maybe it’s because they’re usually grouped together in a collection or a journal, but shorts seldom get highlighted on their own, with a full writeup, like this.

Readers, would you buy a short story for your e-reader? Does the single-serve format make short fiction more appealing to you?