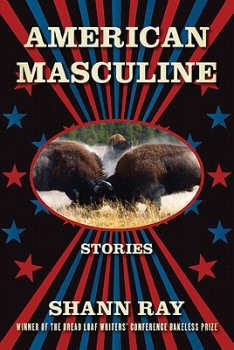 Fresh from a relationship with a feminist scholar, I was on guard against Shann Ray’s American Masculine before I even cracked its spine. With a title like that, I thought, you’d better have a gay man in Chelsea, a drag queen in Flint, a straight man watching a hired man wash his yacht, a man living out of the back of a Volvo in a Wal-Mart parking lot, a Hispanic man washing dishes, a Hispanic man climbing the corporate ladder; you’d better provide one heckova Whitmanian catalog of Masculinity in the U.S. of A. My suspicions only deepened as I read the first few stories. In them men were rough, troubled, distant, and heteronormative. Women were the epitome of light, everything good that men reached toward.

But then a curious thing happened: the beating heart of these stories won. I took a breath and relaxed into Ray’s paternal, semi-omniscient arms. Because it’s not fair to judge a collection by its title. Mary Gaitskill’s Bad Behavior didn’t start out so winkingly alliterative and evaluative. Her publisher suggested that name.

And it’s not fair to judge a collection based on what the author didn’t intend. (See John Updike’s 6 Rules for Reviewing, dear curmudgeon.)

What Ray appears to want to do—and what Ray does—is give us wise, caring, broadly-scoped stories that roam time as freely as they range across the Western landscape in which they’re set, deeply spiritual stories with room for grand characterization—“the malice inside him like the outline of an animal in the dark,” sweeping views—“everything but the land was solitary and small under a wide, wide sky,” and muscular descriptions—“down to the tracks, the wheels, the black pump of the smoking engine, the yell of the machine.” Ray drives into rough terrain with honesty, and delivers intense portraits of what it means to try to be a man in the country, the city, an insurance office, a rodeo.

I love these stories more each time I read them.

Read Shann Ray’s “The Great Divide” from The Better of McSweeney’s, Vol. 2