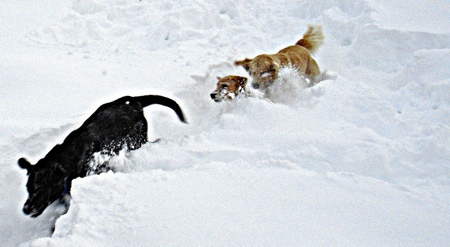 I’ve been wary of dog yarns ever since my mother sobbed through the final chapters of Where the Red Fern Grows, and I didn’t discover until years later the real fate of Old Dan. It was affecting – perhaps too much so – but I also felt cheated somehow, that an emotion so universally felt was a writer’s cheap shot.

Some stories come like a revelation. Ann Pancake’s “Dog Song”—twenty-one pages of alchemical genius, pure voice, and indescribable originality—changed my mind about the dogs, and made me an evangelist. Evan Rehill has been championing this story, and gave it to me, and now I, too, press it on anyone who will give me half a chance.

The opening lines grab me by the scruff every time, adrenalin shot through extremities:

Him helling up a hillside in a thin snow won’t melt, rock-broke, brush-broke, crust-cracking snow throat felt, the winter a cold one, but a dry one, kind of winter makes them tell about the old ones, and him helling up that hill towards her

What is that verb “helling” that we know immediately, yet have never heard before? One of Pancake’s decisions—so genius—is to omit periods from the story. Completely. She places inordinate faith in her reader. “Dog Song” demands attention, immersion, and that getting-lostness that the finest fiction can evoke. But a writer must pull off such a choice immediately, or not at all. Pancake nails it. So right is her story from that first stumbling hillside rush, I didn’t even realize there were no periods the first time I read the story. That’s success.

To say “Dog Song” is about dogs would be like saying “A Clean, Well-Lighted Place” is about a man drinking brandy. I realize that I’ve told you virtually nothing of what the story is about. That’s no accident. It’s Matley, a half-wild backwoods man who loves dogs… but, you see, already that diminishes its raw power. In the words of true believers everywhere: just trust me on this one—it’ll change your life.

Track down “Dog Song,” originally published in Shenandoah, in: