"Barthelme, that comforting surrealist, shows us what we will find most useful: wonder, affection, and the embrace of mystery."

Stories We Love: Donald Barthelme’s “The School,” In Which is Revealed the Meaning of Life

On Barthelme, that comforting surrealist.

Who else could write a story about an unrelenting march of death and produce a feeling of such joy and lightness? Barthelme was the master of the gently surreal, the optimistically pitiless, the playfully serious—and this is a moving, serious, optimistic, surreal, hopeful story. It is at once very plain in its structure and, I think, pleasingly subtle in its message.

Cloaked in its lovely, sidling voice—“Well, we had all these children out planting trees, see…”—death approaches steadily from the outskirts of concern. First death takes the trees. Then the snakes. Nobody’s going to waste any tears on the snakes. Then the herb gardens. Food, but barely. Next we’re into the mammalia: gerbils and white mice. But they’re small. The death of the salamander is explicable, and therefore not too concerning. Ditto the tropical fish.

The puppy needs some accounting for, though. The puppy gets a whole paragraph, and with the puppy arrives real feeling, and real people: the Murdoch girl, the Gristede’s driver, the custodian, the narrator himself —Edgar—and the scene within the school, rowdy, jovial, routine. We have entered the realm of the unreplaceable. These losses are being experienced by people like us.

The losses continue. The first person dies. The progress of death through the human population is systematic, beginning with a distant possibly unsaveable orphan and continuing through parents and grandparents before arriving among the students themselves with the deaths of Matthew Wein and Tony Mavrogordo, who die while playing at a construction site.  hen the last death happens at home: Billy Brandt’s father, knifed by an intruder.

Death has arrived, death is here. The children protest: what is anyone supposed to do about it? Where is meaning to be found? No answer is satisfying. But the students refuse to despair. Instead, they have a request:

They said, will you make love now with Helen (our teaching assistant) so that we can see how it is done? We know you like Helen.

I do like Helen but I said that I would not.

We’ve heard so much about it, they said, but we’ve never seen it.

I said I would be fired and that it was never, or almost never,* done as a demonstration. Helen looked out of the window.

They said please, please make love with Helen, we require an assertion of value, we are frightened.

It is a wild, strange, glorious move, and it’s the beginning of the answer the students are seeking. The remainder of the answer follows, in the story’s final paragraph:

I said that they shouldn’t be frightened (although I am often frightened) and that there was value everywhere. Helen came and embraced me. I kissed her a few times on the brow. We held each other. The children were excited. Then were was a knock on the door, I opened the door, and the new gerbil walked in. The children cheered wildly. 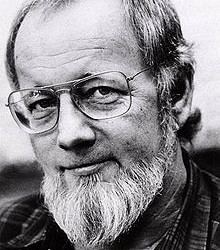 Curiosity, love, personal connection—all sources of solace in the face of death. And once that solace arrives, the dead world returns to life, having gained mysterious and surprising powers during its time away: the gerbil, resurrected, can now knock on doors and propel itself around with human intention. And wild joy is the result.

Which brings us finally back around to the title. If value is everywhere, so, too, is the school. Everywhere around us, at every moment, we are learning how to conduct ourselves in the face of our inevitable personal doom. Barthelme, that comforting surrealist, shows us what we will find most useful: wonder, affection, and the embrace of mystery.

*The excellence of this minute qualification! Edgar is a teacher through and through and doesn’t wish to mislead his students by giving them a false absolute. He is a generous, truthful, optimistic man.