"We don’t need to be told that he’s white. He knows his way around a firearm and is only comfortable – or happy – when he’s alone."

Stories We Love: “An Unfair Question,” by Sam Shepard

RT Both examines how Sam Shepard probes the limits of social unease in times of division. 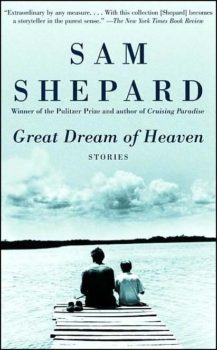 The nameless narrator of Sam Shepard’s “An Unfair Question” is male and middle-aged and lives in a suburban Minnesota town. We don’t need to be told that he’s white. He knows his way around a firearm and is only comfortable – or happy – when he’s alone. And he has deep reserves of anger.

“An Unfair Question” was published in 2002 in The New Yorker and in Shepard’s collection Great Dream of Heaven. It remains essential reading for anyone who’s ever wondered at the depth of white male anger on display during the recent election cycle, not because Shepard deconstructs or reveals a “typical” white American male, not because he creates a sense of empathy for this man and his frustrations. This story is essential because of how quickly, how seamlessly, Shepard annihilates the barrier between his unnamed narrator’s consciousness and the reader’s, and because of the giddy feeling of exuberance that results.

This is a story that rewards rereading. Encountering it for the first time, a reader may fail to notice the subtle sense of menace that is introduced in the opening paragraph and steadily builds to the story’s climax. The story is immediately engaging because of the crispness and clarity of its imagery and scenes. Shepard’s control of tone in this story is masterful. The narrative voice he creates is perceptive and intelligent and quickly creates a sense of identification between protagonist and reader that remains intact as the story inches closer to violence.

As “An Unfair Question” opens, the narrator has volunteered to make a trip to the supermarket for the “family women” who have run out of basil while cooking for a party of some sort, a funeral, a wedding, the narrator doesn’t remember – the only indication the story gives that these are events recalled at a future time. His wife holds a sprig of basil up to his nose, stressing that he must purchase neither mint nor watercress. He is being treated like a half-witted child in this female-dominated environment, and he’s eager for an excuse to escape.

The Rainbow Foods and its wide, empty parking lot, where the American flag “popped and snarled like it was trying to bite itself in the ass” is a place where this narrator experiences a sense of freedom. He stands for a while using his key fob to lock and unlock his car, “watching the lights blink and listening to the horn honk” and causing a bag boy with a “wafer-thin body” to stare. The narrator then points the “remote control button in his direction,” causing the boy to flee “with his train of carts.”

This moment, when the narrator takes metaphoric aim at the bag boy, who, with his wafer-thinness and timidity, has a feminine quality, will be reflected and enlarged during the story’s climax, when “the unfair question” is finally asked.

The narrator’s parking lot moment is followed by a “sudden great feeling of freedom and aloneness” which is intensified inside the supermarket during the next brief encounter with the bag boy, who is “spraying the carrots and bok choy with a fine mist from a water wand.” When some of this “gentle mist” hits the narrator in the face, he experiences a “great sense of joy.”

But when the narrator returns to the party, the story’s mood begins to shift, at first only slightly, then with gathering momentum. Having failed in his mission to locate fresh basil, he discovers that his wife and the other women no longer require it. One of the women gives him a spoonful of basil pesto to taste. “Tastes like basil,” he says flatly. She says it is basil – and giggles. That giggle suggests that something about the narrator makes this woman a little nervous. He states what is already apparent: “Oh, so you didn’t need basil, then?” And again there is menace, still just a tiny ping.

The house, his house, is now filled with people, and the two main subjects of conversation, “Bush-bashing and Tiger Woods-fawning,” are of no interest to the narrator. A woman from New York stands out in her “solid-black scary outfit with lace-up combat boots.” She has the “anguished, perplexed look” of someone who has “done way too much time in psychotherapy” and besides that “seems to have a great appetite for engaging people in her smallest dilemmas and turning them into some huge dramatic deal.” He’s relieved when he spots “a woman from Montana, a friend of my wife’s sister” whom he finds easy to talk to, “mainly because she’ll talk about anything that pops into here head, from Shakespeare to Christmas pudding.”

But this time, the woman from Montana wants to talk about guns. Women are being assaulted in St. Paul, she says. The narrator finds this hard to believe, “but what do I know. I never go into the cities.” He warns her away from purchasing a pistol and urges her to get .410 shotgun for her home. “You can’t miss with a .410 . . . It’s light. It’s fast. And you can shoot from the hip.” She is eager to see the .410, even though it’s downstairs in the basement, packed away in a crate with the other guns – a crate that hasn’t been opened in five years.

Heading down to the basement with the woman from Montana, the narrator is greeted by his Birkenstocks-wearing teen-age daughter, who gives him an affectionate pat on the head that makes him feel at once paternal and “childlike.” The daughter will appear in the story twice, at key moments.

During the basement scene, the pace of “An Unfair Question” slows to real time. The pages that follow take the form of dialogue, in fact a Q&A, of mounting intensity. At first, it’s the woman from Montana asking the questions, and they are silly and irritating, for example: “Oh, so there’s a difference between a rifle and a shotgun?” When she first lays eyes on the .410, she chirps, “Oh, it looks just like a toy gun!”

From a site of social refuge, the woman from Montana has evolved into a world-class fool. She of course demands to hold the .410, and when he checks the barrel to makes sure it’s not loaded and hands it to her, she begins pointing the gun all over the basement, squinting and holding it “so awkwardly that I wonder if she’s ever been anywhere near Montana.” For the second time in the story, the narrator ”feels as if I’ve been duped.” And the ones duping him are always women

She asks him, “sort of wistfully,” whether he has “killed things” with the .410. And when he says yes, she asks him, “What have you killed?”

Now the narrator and the woman begin to talk about the starlings, the baby starlings that used to fall down the narrator’s chimney “bleeding all over everything and twittering their heads off.”

The woman from Montana becomes steadily more disturbed. “Couldn’t you just shoosh them out with a broom or something,” she wants to know. No, he couldn’t. Why? “Because I wanted to see them die!” And still she persists. He describes in increasing detail what he was drinking, where he was living (in rural Virginia), how the birds behaved before he shot them, and why he felt it was necessary.

When the woman from Montana finally attempts to make her escape, it’s too late. He makes “a quick move over to the washing machine” and cracks open the barrel of the 410. And then he starts looking for the bullets that fit the gun. Talking all the while about how unhappy he was back then, during the time of the starlings, he loads the gun with one slug.

Then he aims the shotgun at the heart of the woman from Montana.

The story ends in a moment of suspension. The woman has finally admitted she’s not from Montana and nodded vigorously when asked the unfair question – “Have you ever been very, very unhappy?” Then she screams, and the party upstairs falls suddenly silent, and the narrator’s daughter calls down the stairs, “Dad? Are you all right down there?” And the story ends with the words, “Yes. . . I’m fine.”

In some odd and distinctly unfair way, he may even have become great again.

Male and female, black and white, liberal and conservative, rich and poor. “An Unfair Question” revels in the bifurcated nature of consciousness in the Divided States of America, and the inability to bridge gaps and overcome differences that has led to a permanent state of simmering social hostility. But instead of delivering a jeremiad about this unfortunate condition, Shepard may have aimed to release the reader’s inner hombre, to put you in touch with your inner Eastwood, your inner freedom to be simply yourself without the need for either self-reflection or self-justification. At the very least, “An Unfair Question” will help you to understand what is seen by them when they look at us.