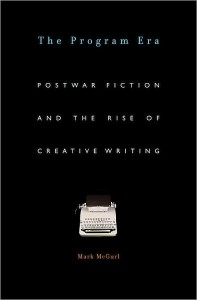 After a hermitish week and weekend of work, I finally had the chance to sit down with my New Yorker this morning and read Louis Menand’s essayistic review of Mark McGurl’s The Program Era: Postwar Fiction and the Rise of Creative Writing (Harvard UP, Apr. 2009). It inspired me to order a copy of the book, which I think might be a great one to discuss via a group review on FWR.

Who would be interested in joining this group review, which we’d aim to do in early August? Celeste, I know you’re in (and thanks to both you and KC for pointing me to the article, and to Erika for writing about it).

A taste from Menand’s review:

Most readers of “The Program Era” are likely to be persuaded that the creative-writing-program experience has had an effect on many American fiction writers. Does this mean that creative writing can, in fact, be taught? What is usually said is that you can’t teach inspiration, but you can teach craft. What counted as craft for James, though, was very different from what counted as craft for Hemingway. What counts as craft for Ann Beattie (who teaches at the University of Virginia) must be different from what counts as craft for Jonathan Safran Foer (who teaches at N.Y.U.). There is no “craft of fiction” as such.

Buy a copy of The Program Era via this link to support independent bookstores and FWR!