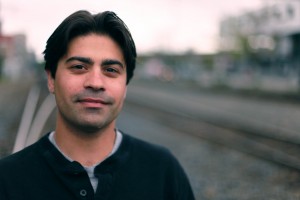 On a recent trip out of New York, headed home to Seattle, where my wife and I share a house and also where much of my writing is done, I found myself on the jet-way leading from the terminal to the airplane. The passengers were backed up single-file along the tunnel, not in any uniform way, but in that impatient, lean to the right then lean to the left then look down the row toward where they should have been five minutes before kind of way. It’s intimate in a way only elevators are intimate. Everyone so close you can listen in on the song playing on the headphones of the girl behind, or smell the roast beef sandwich the man in front of you is carrying.

Two passengers up, there was a father waiting with his three kids—all boys, ranging from the age of five or six to probably ten. In the terminal I’d kept track of them partly because the boys had the sort of energy that was hard for a father of three to keep up with. The father had sat nearby, watching the closed door to the gate while his sons circled our seats in the waiting area at a run. All of them at play in some imagined game. Often losing their way in that headlong way boys of that age do, bumping into a man or a woman without meaning to. Then backing away with a grin, knowing they’d done some wrong, but having too much fun at the time to care.

But in the closeness of the jet-way they were even more of an oddity than in the terminal. The father held the hands of his two youngest while the oldest was free to lean against the wall, or to walk a few paces down the line then come back with a report on how the line was moving. Often, the boy was in the way as the flight staff moved by, or one of the ground crew came through wearing an orange vest. Partly because of the wait, or perhaps simply because the father wanted to keep his oldest close, he began to talk, telling the boy anything that came to mind—facts about planes, how fast they went, who built them, where they could take you, who flew them, how many on a staff. If this guy had been headed to an aerodynamics convention, he’d be coming back the trivia night winner.

Okay, so why the long windup before the pitch? I guess I want to make it clear that these are real people. Because what the boy asked next, his head tilted upward so that he could take in his father’s face, really happened. Though in fiction I’d find it hard to believe.

The boy asked, “What did you want to be when you grew up?” All of us in that tunnel were listening in, the same as when we’d been listening and pretending not to listen, watching as the flight staff tried patiently at first to get by that little boy, then impatiently as they looked to his father for help.

The man took the question in like a deep breath. He held it for a long time in that way you do sometimes when you know the answer but you’re thinking of something better. And after he was done, in the pause when I could still hear the girl’s music playing behind me, the father answered, “I don’t remember. But it’s a good one for you to ask Grandma.”

I think we were all disappointed in his answer. The boy looked away for a moment, maybe feeling the brush-off, and when he looked back the line was moving and we heard no more from the four of them, the father still holding the two youngest by their hands as the oldest trailed behind, now part of the line like everyone else.

Yet despite the disappointment we may have felt in real life by this man’s response, and the empathy we experienced from the son’s inability to connect with his father, in the fictive universe this would have been a superb reply—in that it wasn’t one. It wasn’t over-written. A son asking his father a question like “What did you want to be when you grew up?” is scrubbed, bathed, and then dyed in meaning. It is fraught with resonance and importance. It might as well be outlined in marquee lights, a neon sign blinking “Message!” Yet good writing isn’t this blatant. It doesn’t hit you over the head. It assumes the reader is an intelligent human being who can read between the lines. And so the answer must be subverted. It must be buried.

Because the story here—the true story—of this little instance on the jet-way has nothing to do with the boys running around in circles, or the facts that make up an airplane, or even my take on them. What matters and what is interesting about capturing this moment is what goes unsaid. The story is about a father’s life. It’s about the things he cannot speak anymore.

The true story of this exchange lives within that pause—that little pause on the jet-way when the man considers his life, knows full well what he wanted to be when he was the same age as his son, and then lies to the boy about it.

We’re pleased to have Urban Waite, FWR Contributor and author of the critically acclaimed novels The Terror of Living and, most recently, The Carrion Birds, inaugurate a new blog series for FWR entitled “Author Takes.” These micro-features are designed to give fiction writers the opportunity to muse briefly (800 words or so) on a literary topic of their choosing—the origins of a recent project, a shift in their work, a new way of thinking about teaching, or how the practice of, say, poetry affects their fiction, and so on. Like Glimmer Train’s Bulletins and the “Why We Write” series in Poets & Writers, we’d like to offer a space for reflection on the way fiction intersects with our personal, professional, and creative lives.