Win a Copy of Short People, by Joshua Furst

We all had one. It’s one of those universals of human experience, more constant than love or rage or betrayal or grace. I’m talking about a childhood. Still, it’s impressively difficult to capture on the page, pitch the right tone, allow the perfect amount of insight and innocence, or describe the overblown drama of what it feels like to be a kid. From the opening story of his collection, Short People, Joshua Furst nails it. That first story, “The Age of Exploration,” follows the ramblings of Jason and Billy, best friends, both age six. Most of us can remember things that happened when we were six. But Furst reminds you what it’s like to be six – what it feels like to discover the world: 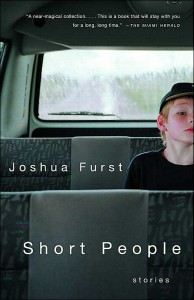 Billy knows about the past and the present, but Jason has learned something new. It’s a secret. Jason knows that the world gets bigger, but it gets smaller, too. He knows there are things he does not want to know. He knows his dad was an engineer once, and now he’s unemployed. He’s going to be an inventor after summer is over and move the family away to a new city, Jason knows that too, but he can’t tell anyone. Jason knows about the future, now. You can be one thing and another and then another and another and on and on, but the things you become sometimes wash the things you once were away. Jason knows what he wants to be when he grows up: he wants to be friends with Billy.

Each of the ten stories in Short People puts you right there, from the longing of a shy girl to be as brave and brash as Mariel Hemingway in Manhattan, to the mercilessness of teenage boys at a Boy Scout Jamboree. Furst’s story “Red Lobster,” which won the Nelson Algren Award, gives a hilarious and horrible glimpse of a father gone so utterly off the rails that an outing to Red Lobster becomes a life-and-death experience for his children. Just flipping through it again, I might be ready for a re-reading. Sign me up for whatever Joshua Furst writes next.

In your comment, tell FWR about a story collection you love (or one you’re looking forward to reading): on May 31, we’ll do a drawing of commenter names, and one lucky winner will receive a copy of Short People. To be eligible, your comment must include the name and author of a story collection. Feel free, if time permits, to tell us more about the book. We look forward to hearing from you!

Learn more about how to participate in Short Story Month 2010: The Collection Giveaway Project.